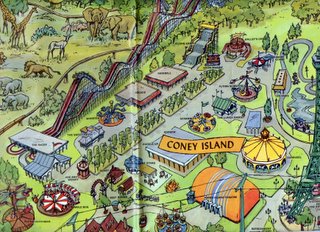 Finally. With all the computer and posting problems I had early in the week, I'm afraid I nearly forgot that I had promised to post more of the huge 1972 Kings Island map. This section presents Coney Island, named, of course, after the beloved park that Kings Island replaced. Many of the other park's rides were brought over or re-created for this area and the design was a virtual parallel to Coney's mall but it just wasn't the same. Yes, those are real animals off to the side. The original plan called for an actual Zoo to be attached to the park. It's my recollection that there were a few animals around early on but, perhaps because Cincinnati already had one of the best Zoological Gardens in the country, that idea didn't last very long.
Posted by Booksteve at 7:58 AM