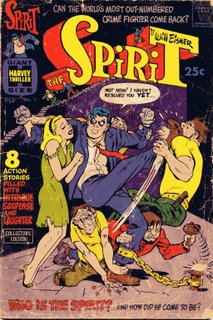 I find myself wondering if DC, in its laudable attempt at re-publishing Will Eisner’s SPIRIT stories, will eventually reprint the hundreds of pin-ups, posters, covers and even the few new stories that the Master created with the character or just leave it at the canonical newspaper appearances. In spite of Eisner’s long-time insistence on not doing new SPIRIT stories, it’s amazing how much new material there was! This being Sunday, when one might naturally expect a SPIRIT section in the good old days, I thought I’d revisit the first time I personally ever met the former Mister Denny Colt. That would, of course, be in the two 1966 Harvey Comics issues. I’m on record as saying I didn’t know what to make of them when I first ran across them at my friend Greg’s house. I remember us sitting at his kitchen table trying to somehow reconcile these strange new stories with Spidey and Batman. They were funny, yet serious. The hero had no super powers and barely appeared in some of his own stories. They were also printed a little smaller than regular comics art. In other words they were…different! I couldn’t get them out of my mind, though and eventually had to trade Greg some old coverless JOURNEY INTO MYSTERY Thor issues for them. 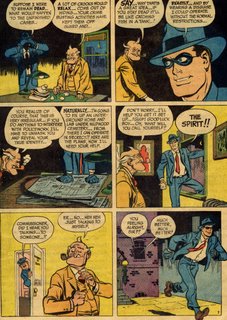 One can trace the timeline fairly directly in retrospect. Harvey Kurtzman (What would our pop culture have done without him!) had reprinted a SPIRIT story in his HELP magazine a couple years earlier. In January of 1966, Eisner created a new, albeit thoroughly apocryphal, story for the legendary NEW YORK HERALD TRIBUNE special comics related supplement (which also featured a controversial Stan Lee interview that’s widely believed to have ticked off both Ditko and Kirby!). 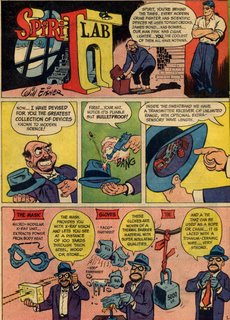 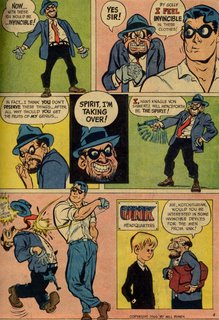 Harvey comics, purveyors of CASPER, LITTLE DOT and RICHIE RICH wanted some of the resulting moola and jumped squarely into the super-hero market with a line packaged mostly by Jack Kirby’s longtime partner Joe Simon. I’m not certain who called whom but the idea for the return of the SPIRIT must have been set in motion fairly quickly considering the lead-time necessary to put out a comic. Still, since Eisner owned (and retained) his own copyright as well as most of his original art and only a few new pages were commissioned along with the great covers, it would certainly be possible to get it colored and ready by mid-summer. Although dated October, comics in those days routinely came out about three months earlier than their cover date (the theory being that news vendors were so dumb they’d never catch on, thus leaving the mag on sale longer than it should be to increase the likelihood of extra sales. More often than not, the old issue was simply pulled when the new one arrived so this concept only really worked with one-shots) so the first issue of Harvey’s SPIRIT probably was on the stands by July. This is, in fact, borne out by the Dec 15 date stamp on the cover of my copy of the second issue. Dealers often stamped the received date on the top mag in a bundle. Thus, although dated March of 1967, THE SPIRIT # 2 was out before Christmas in 1966.
Anyway, the new stuff in these two issues is slight by comparison to the truly classic stories reprinted. With the aid of assistant Chuck Kramer, Eisner offers a whole new look at the character’s origin and a couple of comedy shorts. Perhaps most interesting is a two page INTERVIEW WITH THE SPIRIT text piece that clearly ties the character into the moment with references to 007 and U.N.C.L.E. 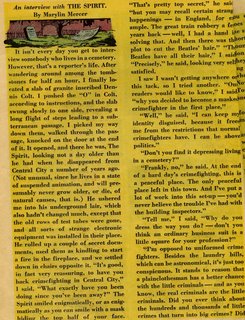 This piece is credited to Marilyn Mercer who, at one time, 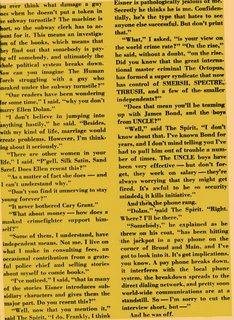 had been Will Eisner’s office manager and, more recently in her role as a journalist, had been one of the folks involved with the NEW YORK HERALD TRIBUNE revival of the Spirit! 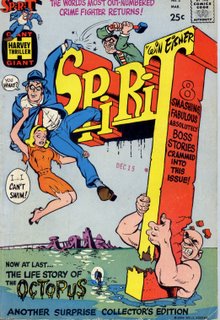 Issue two presents an all-new origin for the Spirit’s gloved but otherwise unseen foe, the Octopus. 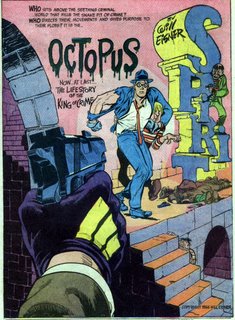 There’s another throwaway humor piece also as well as a letters page offering spurious letters seemingly designed to answer anticipated questions regarding the character such as why he had no powers, was it true he had been published before, etc. In reality, there probably wasn’t time for any real letters to have arrived and be printed by the second issue in spite of the quarterly publication schedule. This, of course, means there sales figures were not in either so why was it cancelled after only two issues? Clearly a third was planned as witness the "Next Issue" page in the back of number two. 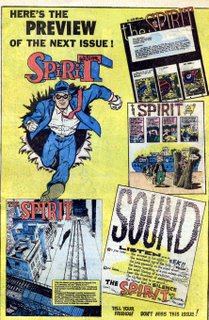 It would be a few more years before the Spirit would appear again. There was a reprint in a British fanzine, some reprints of the daily newspaper strip, the bagged SPIRIT sections and a couple appearances in Warren magazines. Then finally, the Warren Spirit appeared. It’s been all downhill from there with the Kitchen Sink revivals, Eisner’s masterful return to the comics form he practically invented, the TV movie, the merchandising, the DC archives and now, even though Eisner has passed, all new SPIRIT stories coming soon!
Here’s a link to a great checklist of SPIRIT printings and reprintings that covers much of the latter-day material in some depth: http://www.angelfire.com/art/wildwood/check3.html
Posted by Booksteve at 9:05 AM