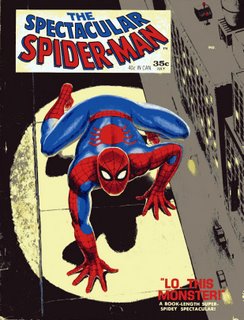 By the mid-seventies, Marvel Comics was deep into the black and white magazine business with CRAZY (their version of MAD), The monster mags (their versions of the Warren line) and SAVAGE SWORD OF CONAN (their version of the so-called "men’s sweat" magazines??). Back in 1968, however, Marvel was an innovator, not a follower, and their very first official foray into black and white magazine-sized comics starred their own flagship character in THE SPECTACULAR SPIDER-MAN! Behind a now-classic cover painting credited to one Howard Rosenbaum (and based, it says, on a drawing by John Romita) is a long (padded in fact!) story written by Stan the Man and nicely drawn in a wash style by Romita and Jim Mooney. Entitled, "Lo, This Monster," it attempts to deal with what apparently was perceived as a slightly more adult, political storyline but turns out to be a pretty standard slugfest just played out in a different venue. A few years later, the entire story would be shoehorned into the regular book’s continuity with a considerable amount of art touch-ups and dialogue changes making this book itself apocryphal when it comes to Spidey’s official canon. 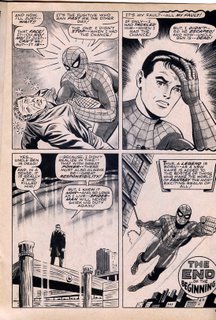 An all-new ten page variation on the classic origin story backs it up and features Bill Everett’s superb inks over Larry Lieber’s pencils. Having only drawn one annual with the character before this, Lieber would go on to draw the web-slinger’s adventures for decades in the newspaper comic strip. 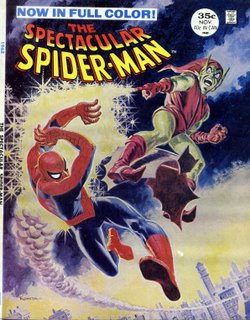 Issue number two of the quarterly title offered a full color adventure (badly colored but full color nonetheless!) in 58 slightly smaller pages (speaking of padded) that presented the very first return of the Green Goblin since 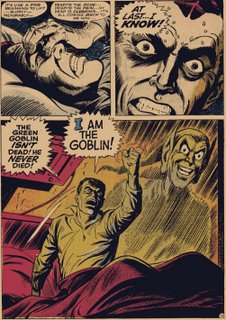 that character had been done away with in Romita’s first story arc two years earlier. 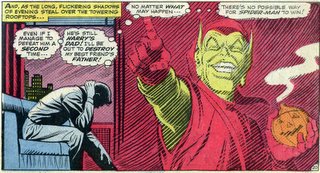 With the importance this particular villain has taken on in the Spideyverse in recent years, I’m surprised but I do NOT think this story has ever once been reprinted, even in Marvel’s Essential volumes! If it has, I missed it entirely. Although the plotline is stretched out, there are lots of interesting little character bits with the Osborns, 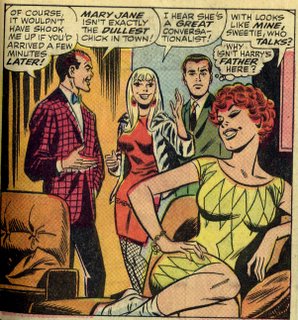 the ever-lovely Gwen Stacy and the surprisingly short and curly Mary Jane Watson!
Basically, Osborn’s exposure to footage of the Goblin in action restores his memories of both his and Spider-Man’s identities and he begins a cat and mouse game that makes Peter paranoid. 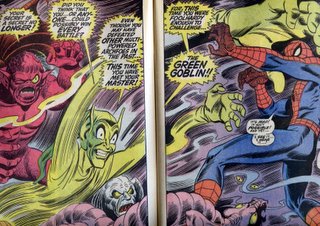 Short of killing his best friend Harry’s father, Peter can’t figure out how to keep Osborn from spilling the beans about his powers. 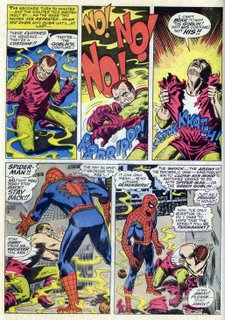 Lots of interesting visuals (mostly by Mooney from the look of it) but, as stated, padded to the extreme. Still, this was/is a pivotal tale in Spidey’s story and there’s nothing apocryphal to keep it out of circulation so why isn’t it included (other than the likely reason of having to shrink the artwork)? Perhaps only good ol’ Irv Forbush knows for sure. 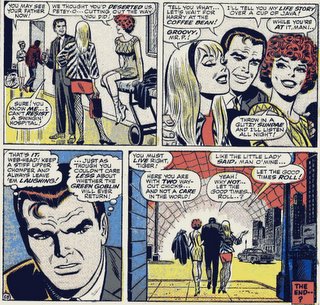 Posted by Booksteve at 6:28 AM