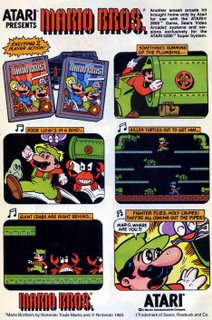 George Clooney's mom gave me my first video game system in 1982. Actually, she gave me my second one also as the first one was defective. That's all a whole story in and of itself but that's not the one we're here to discuss today. The system was an Atari 2600 and it came with the game TANK. Before long, we had added SPACE INVADERS, PITFALL, KABOOM! and CHICKEN among others. I got particularly good at SPACE INVADERS. Later on, we bought a Sega system just as they were becoming obsolete. Never got too many games but I loved PENGUIN LAND. Then we got our first Nintendo and discovered the worlds of the Mario Brothers, Mario and Luigi! In case you've been vactioning on Jupiter for the last couple decades, these guys rule when it comes to video games. The premise is so ridiculous and yet seemingly so perfect for the digital world! Two Italian plumbers travel between and within worlds in giant green pipes, usually to save the Princess of the Mushroom Kingdom. There are friends, foes, monsters, traps and set pieces aplenty. Over the years, the pixalated art style has grown to a lush 3-D world and included Tennis, Baseball, Go-Karts and Soccer along with various adventure, mystery and arcade-style games. The heart of it all still remains the Mario brothers, two plucky little Italian (Well, technically Japanese!) guys who refuse to let any obstacles stop them from saving the day. My personal favorite video game of all time is PAPER MARIO. My son, as you may recall age 9, has spent much of his life learning his way around a console and Mario is always a favorite. They tried him in cartoons though (Capt. Lou Albano) and then in a live-action movie (Bob Hoskins) but Mario in his element remains THE true video game superstar! Although he first appeared, I believe, in the original DONKEY KONG, here's an early eighties ad for the first actual Mario Brothers game.
Posted by Booksteve at 11:30 PM