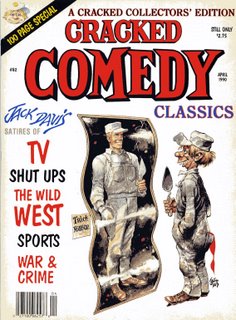 Jack Davis is probably the comic book artist with the most instantly recognizable style to the general public. This is, of course, due to his decades of advertising work for television, magazines and, as seen here, even a postage stamp! 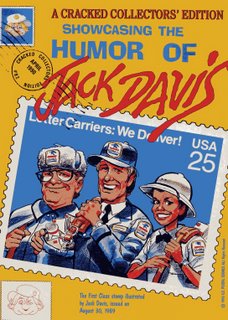 Still, it's hard not to think of Jack as a comics artist when you consider how important his work was to defining the style of EC Comics and MAD. Thus I was surprised to find this forgotten magazine in my archives the other day showcasing Davis' work for longtime MAD rival CRACKED! Published in 1990, three years after THE ART OF JACK DAVIS, also seen here, this is a very nice collection. Along with a huge amount of reprints, there is also a nice career overview by EC uber-fan (and later Wally Wood biographer) Bhob Stewart as well as a knowledgable introductory piece (printed in mid-mag for some reason) by CRACKED editor-in-chief Michael Del-Femine. Both of these text pieces are surprisingly illustrated with bits of the artist's NON-CRACKED work! The art is wondrous and hilarious as to be expected and the whole tribute suffers only from the fact that CRACKED's writers were never as funny as MAD's. 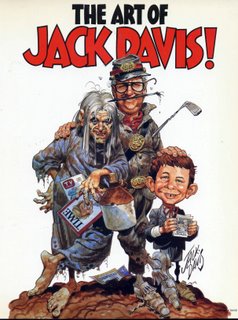 THE ART OF JACK DAVIS is one of those gushy salutes that are great if you already love the artist but offer little real insight. An obsessively detailed checklist is the meat of the book along with lots and lots of rare Davis illustrations. Not all of them are reproduced all that well but all are still choice. 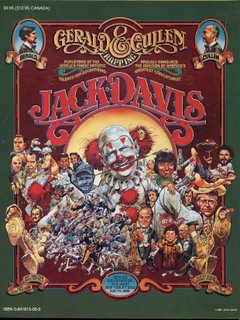 The nifty back cover reproduced here is a collage used in 1979 to promote the artist's signing with a new ad agency. Feel free to check way back in our first week for a look at Jack Davis and Nick Meglin's SUPERFAN strip!
Posted by Booksteve at 9:40 AM