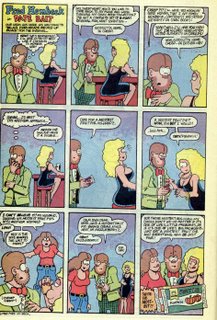 Back with part two of First Comics’ 1983 Hostess ad parodies from E-MAN, today we start with HEMBECK from issue 6. My friend Fred’s cartoon doppelganger had been a familiar fandom figure for a decade by this point and had already had several collections published of his strips. His current astute ramblings can be found, among other places, here: fred hembeck.
NEXUS was arguably the best comic to come out of the Independents Revolution. 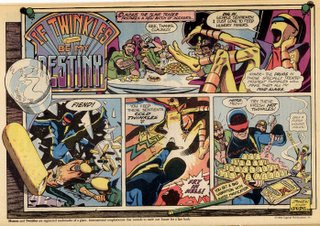 Written by Mike Baron with a distinct eye toward unique characterizations, and drawn by Steve Rude with the cleanest line you ever saw, it’s complex story was essentially about the improbably named Horatio Hellpop and the bad dreams that make him kill bad guys. Except, of course, that there was so much more to it that the above description has very little bearing on the actual strip. Hmmm…Guess I’ll need to do a longer piece on NEXUS later.
Cutey Bunny regularly skirted the bounds of good taste in ARMY SURPLUS COMICS, 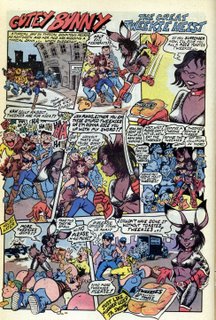 vaguely inspired by the Japanese CUTEY HONEY and drawn by Joshua Quagmire (who turned out to be…?).
BUCK GODOT, ZAP GUN FOR HIRE 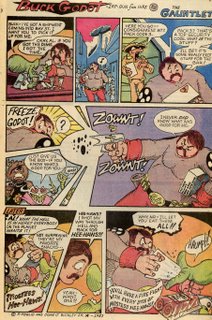 seems like an also-ran now but for a brief period Buck, by Phil Foglio and John Buckley, was hot! If I’m right, he last turned up in a short run series when Foglio’s XXXENOPHILE was popular (and I WILL be covering that surprisingly nifty little comic soon!).
Apparently, the joke wore thin on someone (perhaps Hostess? A parody is one thing but a running parody??) so E-MAN number 10 offers one last one in which Bruce D. Patterson (as BeeDeeP) ends the concept quite finally and violently! (((SHUDDER!!))) 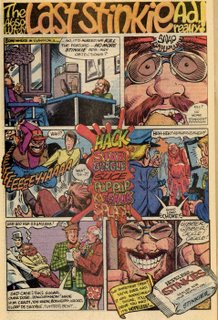 Whew! Finished! That was hard work. Luckily I had my Hostess Ho-Ho’s for energy1 Mmmm…tasty!
Posted by Booksteve at 8:07 AM