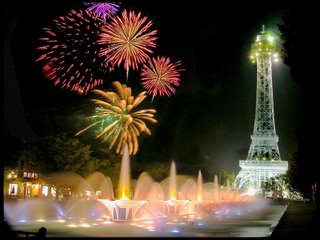 Should be back up to speed tomorrow but in the meantime, enjoy this nice

picture of the nightly fireworks over Kings Island's International Street. I never could figure out exactly why there was a smaller scale replica of the Eiffel Tower at KI but I climbed it once and felt like I wouldn't be able to walk for days. My father, in his sixties at the time, accompanied me. With any luck, I'll be able to post some of my own KI shots soon.

Here's a few links to some nostalgic sites about the park's predecessor, Cincinnati's own Coney Island.


Interestingly enough, the lake at old Coney is named Lake Como. Undoubtedly local resident George Clooney attended there many times as a child and now he owns a villa in Italy on the original Lake Como! Coincidence?

Posted by Booksteve at 5:36 PM