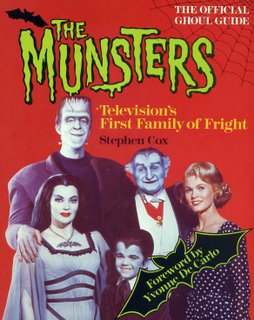 As you've probably heard, "Grandpa" Al Lewis has died at 95 (or more likely 82). An actor, comedian, restaurater, politician, comic book character and all-around cranky guy, his comic teamwork with the late Fred Gwynne on THE MUNSTERS kept the series going long past its one-joke premise. That's what the folks behind all of the revivals of that series can never seem to figure out. It wasn't the dynamics of the characters but the dynamics of the actors portraying them that made them work. Lewis became so well known in the role that many years later, on my first real grown up date at age 23 (I know, I know. It's sad. Let's not go there right now.) the young lady at my side, on recognizing Lewis as a judge in the movie FAME,stood, pointed at the screen and yelled out, "GRANDPA!" to a smattering of laughs and applause. I sunk down in my seat. Check out Stephen Cox's delightful book on the series for more on Grandpa.
Posted by Booksteve at 10:27 AM