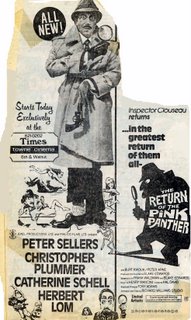 The main criticism of the new PINK PANTHER movie seems to be that Peter Sellers is dead. That, of course, says much more about the late Mr. Sellers than it does the movie. The filmmakers argue that Inspector Clouseau is a classic character, like James Bond and Sherlock Holmes, that can be successfully reinterpreted over and over again by various actors. This has yet to be proven the case. Versatile actor Alan Arkin took on the role in the forgotten 1968 film, INSPECTOR CLOUSEAU. Coming soon after the original 1964 PINK PANTHER and its semi-sequel, A SHOT IN THE DARK, it must have seemed as good a time as any to replace the mercurial, volatile British comic genius but it was roundly ignored and rarely even revived today on c 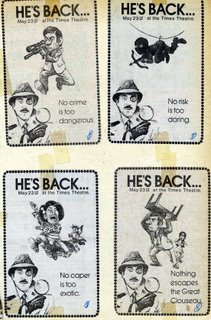 able! Then, finally, in 1975 producer Blake Edwards returned to Peter Sellers at a low point in his professional life and succeeded in reviving both of their careers with THE RETURN OF THE PINK PANTHER. A self-proclaimed man with no personality of his own, the actor effortlessly slipped on the persona of the bumbling French detective again and suddenly became box office gold. 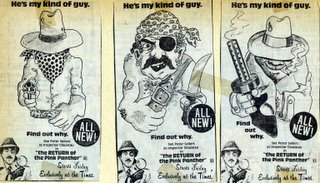 This picture, featuring Christopher Plummer reprising David Niven’s starring role in THE PINK PANTHER and a pre-SPACE 1999 Catherine Schell, was a tad more serious than the series’ later entries but you can’t tell it from Sellers masterful silliness. Still, part of the success of the film surely must be attributed to the marketing which presented multiple variations on newspaper ads 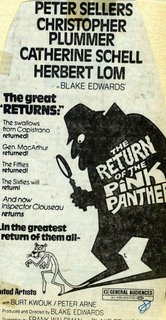 for days prior to the opening. Seen here are just a few (along with the CINCINNATI POST's contemporary review). 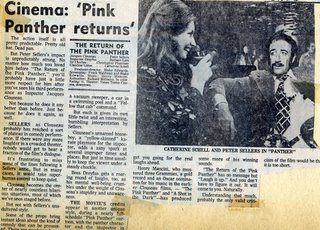 This type of campaign was revisited with each of the subsequent Panther films, going so far as to even have exclusive regional ads. We’ll run more from the Library’s collection later.
Posted by Booksteve at 8:22 AM