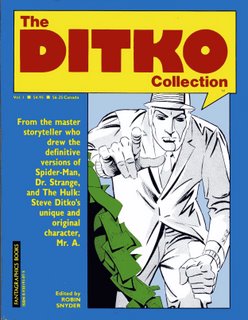 With the possible exception of Michael Netzer (and if you don't know what I'm talking about, don't worry. I'll get to him eventually) Steve Ditko has got to be the single quirkiest comic book artist of them all. Legendarily preferring to let his work speak for itself, little is known of the actual man, himself, making him all that much more intriguing. With a style seemingly influenced by Will Eisner and yet quickly made his own early on, the artist's work is instantly recognizable and original. Ditko spent much of the fifties doing short sci-fi fillers for various companies. In the sixties he, of course, brought us our first meeting with Peter Parker and THE AMAZING SPIDER-MAN in an absolutely amazing run that saw his already excellent storytelling skills become honed to the point of sheer comic book genius. Then he took all of those skills and arguably used them even more creatively on Marvel's DOCTOR STRANGE series before jumping ship to revive both CAPTAIN ATOM and THE BLUE BEETLE at Charlton Comics. At DC in the late sixties and seventies he created BEWARE, THE CREEPER, THE HAWK AND THE DOVE, SHADE, THE CHANGING MAN and STALKER. All the while, Steve Ditko was also still churning out carloads of short sci-fi and horror stories for Charlton comics as well as an amazing series of very personal, philosophically-oriented short comics for various fanzines. These were, in the mid-eighties, compiled by Robin Snyder for Fantagraphics in the two volume set of THE DITKO COLLECTION. As with all things Ditko, his use of the comics form is fascinating but these decidedly non-commercial pieces quite frankly can hurt your head! Lots of heavy-handed Ayn Randian dogma is inserted, 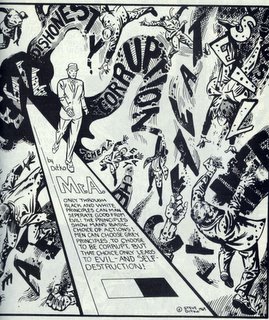 sometimes more blatantly than others. 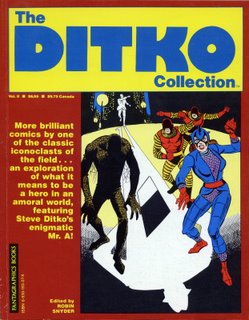 On the positive side, you get Mr. A ("A is A. A thing is what it is."), a variation on the artist's Question character from Charlton (When Denny O'Neil revived THE QUESTION at DC, he added a lot of philosophical elements, perhaps in a nod to this connection). Some of the Mr. A stories are traditional crime stories but many end up as surreal setpieces used simply as a pulpit to espouse their creator's viewpoints. Again, never boring! Most of the MR. A stories appear in volume 1 but a few were apparently saved for the second collection. Other quirky Ditko heroes featured here include Liberty Agent, Kage, the Void, D. Skys and Masquerade. Snyder would go on to collaborate with the artist on a number of small overpriced collections featuring more of the same. The aging artist's last mainstream work appears to have been for DC in 1998 but the questions remain: Why did he prefer to work for the smaller Charlton? What exactly was his relationship with bondage artist Eric Stanton? Why did he leave Marvel at his peak? Is he happy? Is he homeless? Is he comfortable? Is he working? Did he see the Spider-Man movies and how did he feel about his on-screen credit? Sigh...but I respect the man's wishes. Perhaps more than any other artist, his work does speak for itself. For more on Stainless Steve, here's a fun new Ditko blog: Ditko Comics Then, of course, you must check out DITKO LOOKED UP - Blake Bell's STEVE DITKO Web Site where, among other neat things, you'll find the only known pictures of the artist himself!
Posted by Booksteve at 8:19 AM