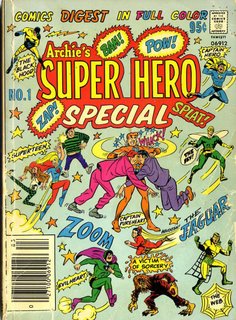 My younger cousin Rick introduced me to ARCHIE comics in general and, since it was the mid-sixties after all, the Archie super-hero and spy parodies in particular. He's been running a nice sequence on these series over at On My Mind: Captain Pureheart lately. Archie was Pureherat the Powerful (AKA Captain Pureheart), Jughead was Captain Hero, Betty was Super Teen and even Reggie Mantle became Evilheart who, in spite of his name, often worked as a sort of anti-hero rather than as a villain. He even had his own title! The whole series didn't last even the full length of the Batman craze but there have been a few attempts at revivals. Most notable perhaps were the three digest comics seen here dating from 1978-1981. They garnered quite a bit of publicity at the time when DC and Marvel jointly took legal action to stop Archie Comics from using the word "super-heroes" in their title! Seems that the two bigger companies had quietly but jointly (!) trademarked the term. There was lots of speculation in the fan press that the whole concept probably wouldn't stand up in court but it got Archie enough press to do a second volume. The first volume is a mix of the super teen spoofs and "straight" Mighty Crusaders era stories with Black Hood and The Web. The real treat hidden in there is the Simon and Kirby versions of the Fly and the Shield from the late fifties. 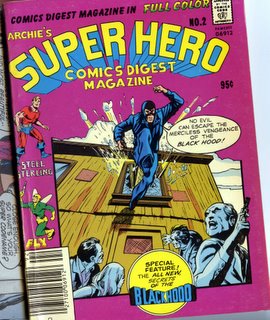 Issue two is arguably even more interesting as it prints the entire, previously unpublished issue of THE BLACK HOOD done by Gray Morrow during a brief, aborted run as an editor at Archie. There are also some more Fly stories along with the Hangman, the Jaguar, Pureheart and friends and a non series Wally Wood fantasy tale! 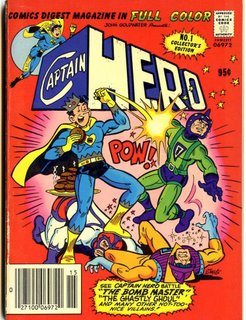 The Captain Hero volume returns with an all-humor format reprinting more of the Super-Teens. In fact, ARCHIE'S SUPER TEENS would be the title of the next attempted revival in the mid-nineties. Running at least 4 issues, these too were mostly reprint but there was one new story per issue. 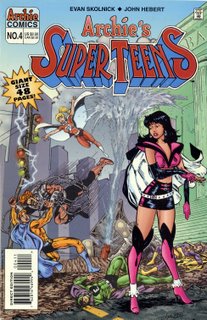 The story here in issue 4 is how Veronica, always a victim in the originals, finally gets her own super-identity--Vanity! The art, if you want to call it that, by one John Hebert, is substandard Liefeld rip-offs and probably the absolute worst I have ever seen in a mainstream comic book. Ludicrous proportions, choppy lines and non-existant storytelling. I see why this didn't catch on. I am, however, still holding out hope for a trade paperback or at least a digest collection of THE MAN FROM R.I.V.E.R.D.A.L.E.
Posted by Booksteve at 9:36 AM