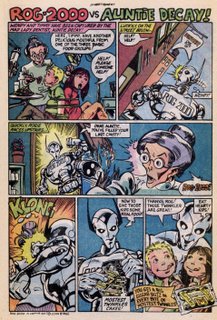 A goofy but well-remembered aspect of comic book history in the late seventies is the Hostess ad campaign that featured comic book heroes in childish, one page "adventures" where everything is made good in the last panels by the introduction of Twinkies or cupcakes. If by some bizarre chance you’re reading this and don’t have a clue what I’m speaking of, please go here:Hostess Comic Book Ads I’ll wait. There. Got it now? Good. Anywho, First Comics burst on the scene running in 1983 and one of their flagship titles was a revival of Charlton’s late cult favorite, E-MAN by Nick Cuti and Joe Staton. A frequent back-up strip in the original 25 cent run of the series had been ROG-2000 by a newcomer named John Byrne. By 1983, however, Byrne was THE fan favorite and simply had no time for E-MAN…except, that is, to provide a quick one-page parody of those ubiquitous Hostess ads for old-time’s sake. According to the editorial page, that seems to be all it was and not intended at that time to be a running gag. 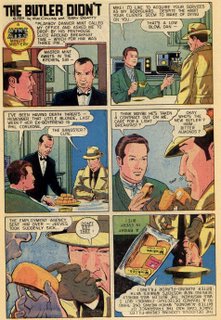 Issue 2, however, features a MIKE MIST MINUTE MYSTERY by Dick Tracy author Max Collins and his MS. TREE collaborator, Terry Beatty, that is ALSO a Hostess parody. By this time, it was clearly a regular feature as issue 3’s return of Lee Marrs’ groundlevel character, 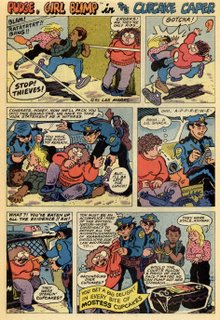 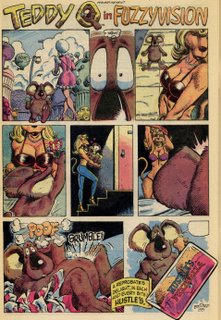 in a decidedly PG rated interlude in the next issue, followed by Reed Waller’s OMAHA, THE CAT DANCER in issue 5. 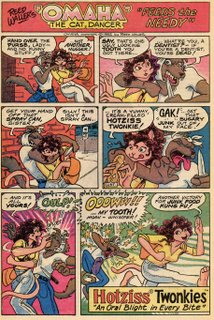 Ironically, this is Omaha’s only color appearance, only G-rated appearance AND only mainstream comics appearance ever!
The First Hostess parodies ran another five issues and we’ll have the rest tomorrow. Check back tomorrow for Nexus, Hembeck, Cutey Bunny and more!
Posted by Booksteve at 8:32 PM