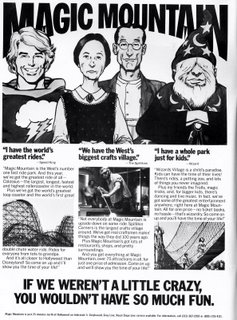 Well, I've never been there but with all of this Kings Island talk lately, I noticed this 1978 magazine ad for Magic Mountain and the fact that it had Adamsesque art made me think you all might like it. Outside of the first guy's face, I don't believe it actually IS by Neal Adams but clearly it's a product of his Continuity Associates studio which moved heavily into advertising during this period. I have no real reason to think this but something about the style says "Jerry Bingham" to me. Bingham was one of several artists (such as Bill Sienckewicz)whose early work was quite similar to Neal's before they developed their own style. I'd venture that Neal himself inked and/or re-touched the face on the hero guy himself, though.
Posted by Booksteve at 9:01 AM