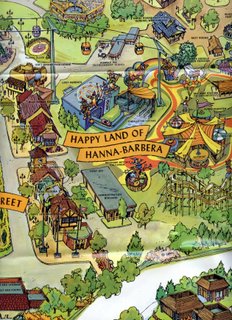 I found a full-size fold-out map of KI from the first or maybe second season. Since, as usual, my scanner is limited, I'm going to run the various sections, starting today with the ever popular Happy Land of Hanna- Barbera. Again, as you zoom in, you'll note that several rides were named after shows that had been off the air for some time even at that stage. More later or tomorrow!
Posted by Booksteve at 10:19 AM