For almost thirty years, one of my favorite fantasy artists has been Jeffrey Jones (not the actor, silly!). 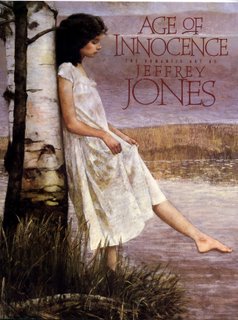 Let me rephrase that. Jones has been one of my favorite artists of any kind! I first discovered him in NATIONAL LAMPOON with his incomprehensible, pseudo-philosophical one page monthly strip entitled IDYL. Hey, it may have seemed pointless, but the girl in it was naked so I loved it! I followed him to SPASM, an underground collection of his fanzine stories and discovered his cover work for paperbacks and black and white horror magazines. He even did a few covers for DC’s WONDER WOMAN but his style was reportedly frowned on at the company. At various times, that style has been heavily influenced by Frazetta, Wyeth and Klimt but still comes into its own.
At 1977’s New York Comic Art Convention (which was in Philadelphia. Like I said last time, I’ll explain later) I had the opportunity to see an amazing exhibit of the artist’s paintings, some huge!

One image featured a woman standing next to a wall and was virtually life-sized with the wall taking up much of the painting! I was drawn, however, to a truly beautiful and subtly inspiring one entitled BLIND NARCISSUS. Years later, I was able to get a print of this and it hangs in my living room to this day.
Jones created an internet site which offers marvelous galleries of his work but a few years ago, he announced two things. One-that he was becoming the woman he had always been meant to be and two-that he had been dealing with physical and mental issues and was living in a mental health facility. The most recent update on his site, dated 2004, indicates that he/she was tentatively living on his/her own again. (Does anyone know anything beyond that? A quick check of the ‘Net didn’t get me past that at all.) There is a new painting up for bid on Ebay with the auction running through this week so clearly there’s some activity going but how is she? Looking over the artist’s body of work today, I can’t help but feel that Jeffrey Catherine Jones should be recognized as having transcended his/her fantasy roots and grown into one of the great painters of our time. For more on this artist check out: theartist.html, Jeffrey Jones, Illustrator of Fantasy and Science Fiction, and best of all the Galleries at http://www.ulster.net/~jonesart/paintings.html.
Posted by Booksteve at 11:28 AM