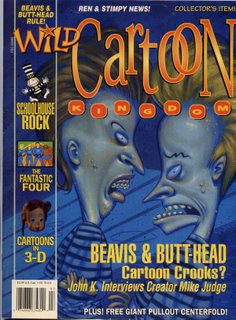 Well, we seemed to have drifted into a magazine theme this week. Today’s offering is issue three of WILD CARTOON KINGDOM from 1994, a bizarre journal published by, of all people, HUSTLER’s Larry Flynt! This is the only issue I ever saw and quite frankly, it leaves a bad aftertaste. Parts of it are really good but the elitist attitude that permeates the overall enterprise is a real turn-off.

Edited by FILM THREAT’s Chris Gore (now an IFC game show host!), the emphasis in this issue is on cover feature BEAVIS & BUTTHEAD, a vulgar but clever one-joke premise that stretched out into far too many seasons of TV pointlessness. REN & STIMPY’s Jon Kricfalusi interviews B&B creator (and SPY KIDS actor) Mike Judge in a too-long talk that ranges from truly interesting to "What were they drinking?". Other negative stuff includes a so-called review of the then-new ANIMANIACS that admits the reviewer hadn’t seen the show and then goes on to mercilessly ravage it. Ugh! 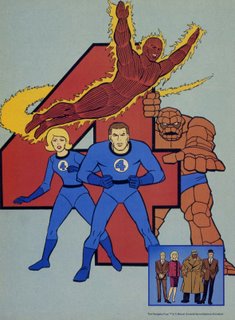 The good stuff, though, is choice! Topped by a marvelously (pardon the pun) illustrated article on the various animated incarnations of the FANTASTIC FOUR by one of my favorite fan writers, the amazingly knowledgeable and prolific Andy Mangels (late of AMAZING HEROES. Here’s a link to his website:Andy Mangels Home Page). A lot of Alex Toth’s model sheet design work for the sixties series is seen here along with a bit of Kirby’s from the seventies incarnation with H.E.R.B.I.E.

Another great piece is the article on puppet animation 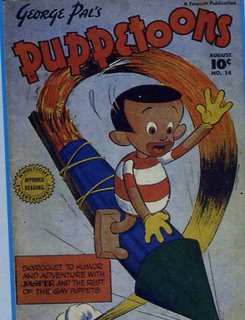 with an emphasis on George Pal’s great and rarely seen Puppetoons. There’s also a long piece on SCHOOLHOUSE ROCK with a complete checklist and a clever, if spurious, history of Elmo Aardvark. 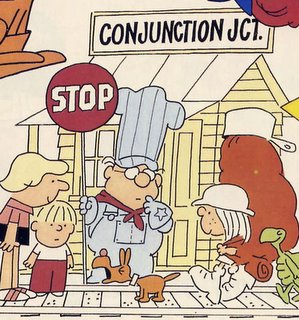 Greg Theakston and Jerry Beck, both known for quality work, turn up in the credits but I can’t figure out what they did. All in all, for a major newsstand magazine on cartoons, this was a bit of a disappointment. I don’t know how long WILD CARTOON KINGDOM lasted but I can’t help but think I didn’t miss much by getting only this issue.
Posted by Booksteve at 10:00 AM