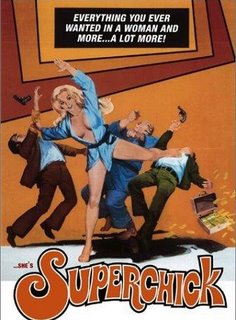 Been having a run of bad luck lately, not the least of which is that my scanner isn't working today so instead of the original newspaper ads for SUPERCHICK that I was going to run, you get a color variation on the poster from the Net. Sigh.

On the surface, SUPERCHICK screams exploitation movie. In the cast are seventies cult faves Candy Samples and Uschi Digard as well as good old John Carradine. Up front, though is Joyce Jillson, astrologer. Yup. Following up a stint on TV's PEYTON PLACE, gorgeous blonde Jillson becomes the improbably named Tara B. True, a stewardess (that's what we called flight attendants in them days, sonny!)described in the original ads as "the Queen of Kung-Fu!" She was also "a super charged girl! Always ready for action...any kind." That said, SUPERCHICK, in spite of someone on IMDB's opinion that it's actually a "feminist" cult film, is a pretty darn boring affair with bad acting, bad effects, dull (and not much) sex and even lousy kung-fu! Come to think of it, this poster (heavily retouched in my newspaper ads) is probably the coolest thing about it.

The reason that I'm running this, however, is that Joyce Jillson DID go on to become an astrologer of some reknown (at one time the "Official" astrologer for Twentieth Century Fox!) and once, around February of 1981, I called her on a local call-in show for a reading. We spoke for about ten minutes as I recall and she ended by saying that the luckiest day of the year for me was going to be May 23rd. I circled it on my calendar and waited patiently. Come the big day, I arose in great pain that got progressively worse. Eventually I ended up in the hospital on Percodan for the first (and still only) time in my entire life with a kidney stone! To be fair, she didn't specify "good" luck but still...Aaargh! In times like these where my luck seems to get progressively worse, I always think of Joyce, who died in 2004. Sigh (again!). At least there's a Friday the 13th coming up next week!
Posted by Booksteve at 8:48 AM