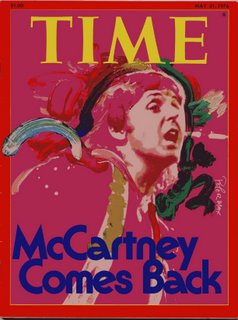 It had been ten years since Paul had performed onstage in the US. Since forming Wings in 1973, he had done several small concert tours around Europe but a pesky drug conviction had dogged him and kept him from getting the proper US visas. Then, suddenly, things were cleared up (around the same time John Lennon’s immigration troubles were also cleared) and the Wings Over America tour was a go. 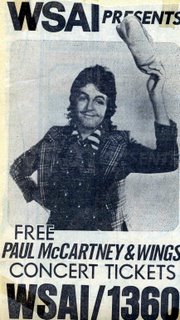 The week that this issue of TIME was on the stands saw Paul’s SILLY LOVE SONGS at number one on the charts and best of all, I saw Paul in concert in Cincinnati. In fact, I still have my ticket! Like the infamous Who concert at the same venue a few years later, Wings had festival seating, meaning every man for himself. I saw the gathering crowd on TV and so rushed to join it. By the time the doors were opened, I was somewhat near the front but I was almost immediately knocked down and stepped over. Since I was so close, I managed, along with a few other concertgoers, to crawl inside. No one was taking tickets at all which is why mine is still intact.

I then proceeded to grab the first seat I could find. It happened to be about a mile from the stage but the important thing was I had one!

If you’re a fan, then you know it was a great tour (here’s the local review), 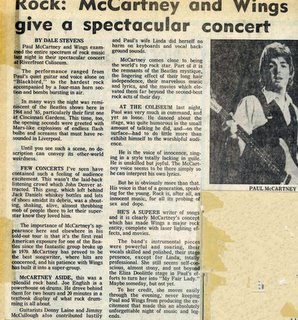 documented first in a late night TV special, then the triple album at the end of the year and eventually (about 5 years later I believe) in the feature film, ROCK SHOW. 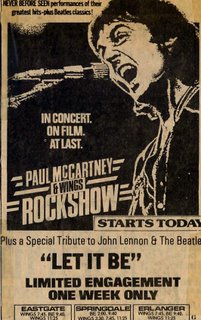 Wings will undoubtedly and unfairly always be overshadowed by the legacy of the Beatles but they were, in all of their incarnations, more than just McCartney’s backing band and this issue of TIME will always remind me of that magical moment when I saw them live! I’ve seen Paul several times since (until the ticket prices became astronomical!) and with much better seats but seeing Wings was a special treat!
Posted by Booksteve at 9:16 AM