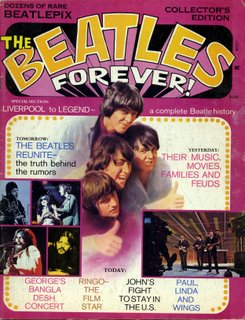 I'm on record as being a big Beatles fan but quite frankly, my very first Beatles record was THE LONG AND WINDING ROAD, their last official pre-breakup release. Oh, I'd seen the movies and heard them on the radio a bit but for the most part, they just weren't my "thing" at the time. Thus it was that, in the early seventies, I was trying to catch up both on the music and the history of the group. At that time, the thousands of books on the Fabs and their place in history were mostly still in the future. One of the first items I came across to give me a Cliffs Notes version at least of their whole story was this 1973 magazine published by Norman Jacobs and Kerry O'Quinn.

Now for all I know they'd been publishing mags together for years but this is the only one I had ever seen at that point. In fact, until tonight, I'd never even noticed that the pair had produced this one-shot. I recognized their names from a later project, though. In 1976, Jacobs and O'Quinn launched STARLOG, 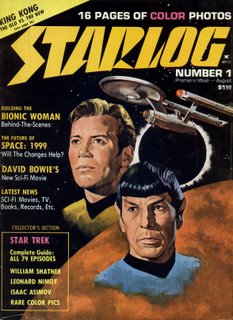 at the time one of the few places for sci-fi/fantasy news. I followed it religiously as imitators came and went in the wake of the sci-fi boom started by STAR WARS and CLOSE ENCOUNTERS OF THE THIRD KIND the following year. The mag has gone through a lot of changes in its nearly thirty years but I saw a copy on the stands recently. I hope some young fans are still as excited about it as I was. Maybe they'll take that excitement and create something even better for the next generation, the same way Jacobs and O'Quinn took the experience from their Beatles book into their now-classic sci-fi mag.
Posted by Booksteve at 9:04 PM