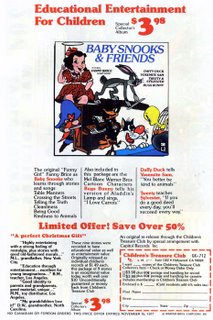 Now here's an unusual pairing: Fanny Brice's beloved Snooks teamed with the classic Looney Tunes gang...in the 1970's!! This ad comes from a 1978 Gold Key comic (note that the ad itself expires in November of 1977). As near as I can tell, this album collects unchracteristically "educational" children's records by Brice and then, for some reason throws in similar lessons from Mel Blanc as Bugs, Daffy and the rest of the Warner characters.

Baby Snooks was an abrasive, precocious child created by the legendary Brice for the Ziegfeld Follies. The character became a radio mainstay that appeared on her own show as well as various other shows right up until the actress's death. Considering all the trouble she caused for her baby brother, Robspierre, she was definitely NOT known for being a good role model for children!

Bugs and his buddies, revered by all today, were taken to task in the seventies for the inherent violence of the Warner cartoons. Some were banned, some cut and all were out of fashion for a time so it's only natural that they would attempt to use the squeaky clean children's records here. Remember, the originals were never meant just for children. Somewhere along the line people forgot that and we ended up with this record.
Posted by Booksteve at 8:47 AM