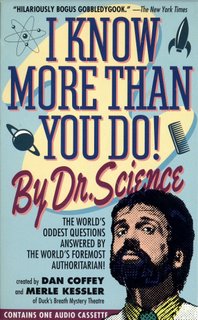 Okay, it sounds like a bad name for a comic book hero but in actuality Dr. Science is a modern day radio star, appearing in a long-running series of minute and a half long radio bits in which the esteemed Doctor answers questions from listeners as they're read to him by his assistant, Rodney. There was even a short-lived television transfer in the mid-eighties. To this day, though, radio--as well as the Internet--is where you'll find him doing what he does best. Why? Because "he knows more than you do! 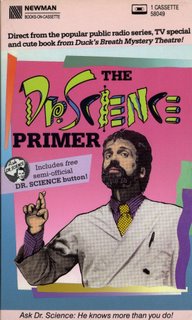 He has a Masters Degree...IN SCIENCE!!" Smug, arrogant and idiotic, this latter day Clyde Crashcup is the creation of Duck's Breath Mystery Theater veterans, Dan Coffey and Merle (Ian Shoales) Kessler. Coffey plays Dr. Science with a smooth voice and a smart ass know-it-all outlook that annoys some folks (like my wife) but which I've always found tremendously, cerebrally hilarious. here's a link to the Official Ducks Breath Mystery Theater site where you can sample some Dr. Science and read up on lots of other kewl stuff from one of the funniest comedy troupes of them all.
Posted by Booksteve at 9:38 AM