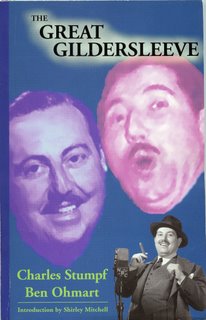 THE GREAT GILDERSLEEVE was arguably the first real situation comedy. Premiering on radio in 1941, it spun off the Gildersleeve character (as played by Hal Peary) from the long-running comedy series, FIBBER MCGEE AND MOLLY. FIBBER, like radio comedies before it, was aware that it was a radio comedy. Besides its less than plausible husband and wife situations, it offered singers and band numbers. For all intents and purposes, THE GREAT GILDERSLEEVE was (according to Derek Tague) an "Earth 2" version of the character, leaving behind the wife his character had on the earlier series along with, eventually, all other continuity. In fact, while Gildy refers early in the series to his "little chum," Fibber McGee, that name is later referred to only as character on a radio series to which his nephew, Leroy, likes to listen.

Ostensibly the story of a pompous but likable windbag who moves to a small town to raise his young niece and nephew and becomes the local water commisioner, the series would ultimately run for sixteen years, literally making the characters seem like family.

The show became so popular that star Hal Peary was billed as "The Great Gildersleeve" when he guested on other shows (always in character!) and later recorded children's records. He also starred in a fun series of B movies in the early forties. 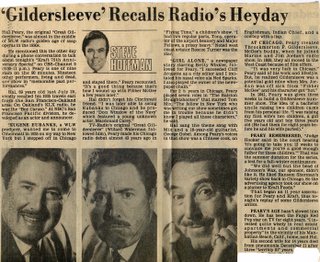 Through various missteps, Peary parted company with both the role and the show of Gildersleeve in 1950 but was fortuitously replaced by actor Willard Waterman whose voice naturally sounded nearly identical to Peary's. He replaced Peary's trademark laugh with what he termed a "polite chuckle" but other than that, the series continued on with few changes. Waterman even took the role to television in an ill-fated (apparently written by someone who had never heard the radio version), short-lived series.

Even in the sixties, when I was growing up, my dad would see Hal Peary on television and say "There's ol' Gildersleeve" so I came to associate the laugh with the name long before I heard the series. Waterman shaved his mustache and costarred on TV's DENNIS THE MENACE before going on to a long career in theater.

In the 1970's (Aargh! I didn't date the clipping!), I clipped this rare article/interview with Hal Peary from the Cincinnati Enquirer. He was returning as Gildy one more time on Kraft's 75th Anniversary radio special. (Yes, ocassionally you would STILL get a new network radio special in those days!)

Around 1980, a local public radio station here in the Cincinnati area began running the show and I finally got to meet Gildy, Leroy, Marjorie, Birdie, Judge Hooker, Mrs. Ransom (played by Shirley Mitchell) and the rest. The station ran and reran THE GREAT GILDERSLEEVE regularly (not all episodes) until just this past year!

In the late 1980's I had the privilege of having dinner with Mr. and Mrs. Willard Waterman, 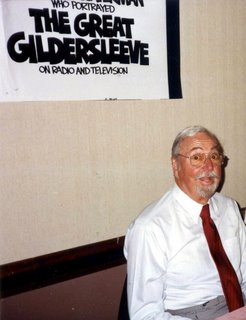 undoubtedly one of the classiest couples I have ever met. Mr. Waterman was, as you might hope for, pleasant, witty and charming but he was also quite erudite and carried himself like a true gentleman. Three years later, he returned to the area and I appeared as Judge Hooker opposite him in a re-creation of a Hal Peary GILDERSLEEVE script. Shirley Mitchell appeared as Mrs. Ransom and Louise Erickson, one of the original "Marjories" appeared also. (The notorious Carl Amari played Leroy.) By this point, Mr. Waterman was clearly ill and had lost weight from our previous meeting but when he stood at the mike, he somehow pulled it all together and he WAS Gildersleeve yet again.

During that period, I was also privileged to have dinner with and perform with one Charles Stumpf, an author of two books already in the Library, one on FIBBER McGEE and one on the Dead End Kids. We spoke of how he was working on a book on Gildersleeve. Some years later, thanks to Bear Manor Media and Ben Ohmart, it appeared, the first of a couple of books on Gildy from that estimable publisher (who, in case you've forgotten is publishing ME in IT'S THAT TIME AGAIN 3, coming in February).

For more info on the first real sitcom, check out The Gildersleeve Project.
Posted by Booksteve at 9:26 PM