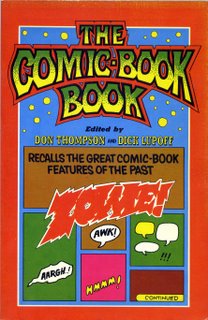 The other day, I wrote of four very influential books about comic books. Today, I offer THE COMIC BOOK BOOK, the official sequel to the legendary ALL IN COLOR FOR A DIME. The latter book was actually a collection of early sixties fan reminiscences on golden age comics published originally in the science-fiction fanzine XERO. This follow-up consisted of all-new articles of a similar nature on different aspects of comic book history.
Edited, like the original, by uber-fans Don Thompson and Dick Lupoff, their introduction offers a fascinating look at the possible directions for comics in the future.

Subjects covered in this entertaining and enlightening volume include Jack Cole and PLASTIC MAN, Will Eisner and THE SPIRIT, TARZAN, airplane comics, EC, Frankenstein in the comics, magicians and radio heroes. Along with the editors, the authors include such experts as Maggie Thompson (longtime CBG editor), Bill Blackbeard (internationally respected comic strip historian), Don Glut (world's greatest expert on Frankenstein in all forms), Caz Cazadessus (world's greatest Edgar Rice Burroughs expert) and Ron Goulart (sci-fi author and all around pop culture historian).

Time being what it is, we now have DC's Archive reprints of PLASTIC MAN and THE SPIRIT as well as Russ Cochran's unprecedented hardback box sets of THE COMPLETE EC LIBRARY but note that at that time, these were virtually impossible for the casual fan to come by! Now we just have to figure out how to afford them!

Just a reminder that co-editor Dick Lupoff is also featured in IT'S THAT TIME AGAIN, VOL. 3, now scheduled for release in March from BearManor Media and featuring my own book debut as well!
Posted by Booksteve at 11:14 PM