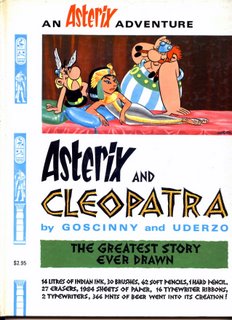 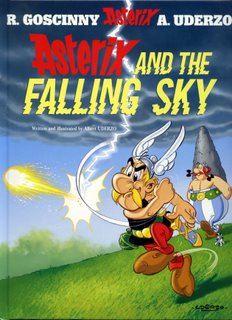 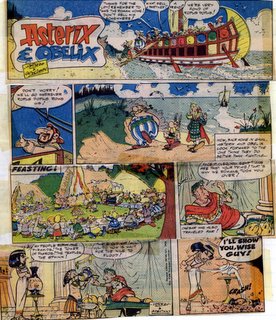 The release of the latest Asterix book, the somewhat controversial ASTERIX AND THE FALLING SKY, has gotten me all nostalgic about the little Gaul’s adventures. With a massive worldwide first printing, this is, as I believe Tom Spurgeon pointed out recently, the most succesful comic book on the planet. In spite of many attempts, though, the series that began in the French magazine, PILOTE, in 1959 and became an international phenomenon has never caught in the US.

ASTERIX tells the story of a little French village that managed to hold out against the conquering Romans due to a magic super-strength potion invented by the resident druid, Getafix. Asterix is the little fellow who is gifted with the potion and his giant friend Obelix,who was dropped in it as a baby, helps him defend their village. Historically accurate up to a point, the strip is filled with lush, detailed artwork, punny dialogue and genuinely funny plots (as well as the occasional anachronistic joke).Translated into many languages, Asterix is well-known throughout the world but in this country, you’re most likely to encounter the graphic novel collections in your high school French or Spanish class. That’s actually where I discovered the series in 1974. I was able to find a few English translations in bookstores and became hooked. Beginning in February of 1978, there was a short-lived and apparently little-known attempt to syndicate a re-translated, re-pasted and retouched version entitled ASTERIX & OBELIX in US comic pages. I’ve posted a few panels from the original for contrast. 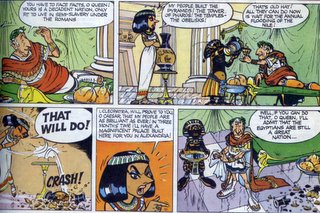 Note the slave’s skin color changes. "Good natured" ethnic humor was and is a hallmark of the series with stereotyped characters from all countries. To be honest, the strip may have begun US syndication earlier as the first ones in my local newspaper began (after a pre-packaged week of introductory strips seen here. 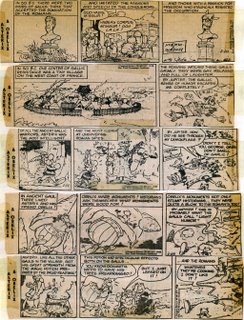 Note that "Getafix," presumably because of the drug implications, becomes "Readymix!")) with what was clearly the end of some other adventure. The only story printed in my area was ASTERIX MEETS CLEOPATRA, arguably the best known of all the adventures, and even it was never finished.

Printed here is a letter published in the Cincinnati Enquirer on April 20, 1978 and my own response defending the Gauls, published on May 8th. By that point, though, ASTERIX & OBELIX had already given up the ghost in the market, the final Sunday strip (seen here) 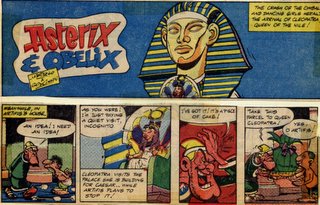 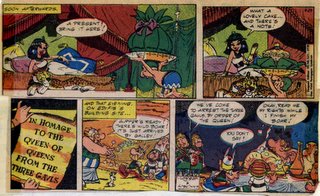 having been printed on April 23rd. Whether it continued elsewhere, I do not know and have not been able to find out.

Since then, there have been more pushes for the American market, most recently when Barnes and Noble (through their Sterling imprint) put up dumps of Asterix in some stores to little effect. None of this, nor even the death of co-creator Rene Goscinny in 1977, has stopped the world-wide success of the series as continued by original artist (and now writer) Albert Uderzo. There are multiple animated films, several big-budget live action adventures (one translated by Monty Python’s Terry Jones!) with Gerard Depardieu as Obelix(!) and even a theme park in France!

Here’s a link to the Official Asterix website: ASTÉRIX - Le Site... Accueil and just for fun, 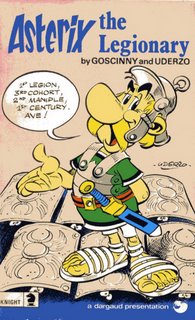 a scan of a mass market style black and white British paperback from 1973 that I found recently in a used bookstore.
Posted by Booksteve at 3:02 PM