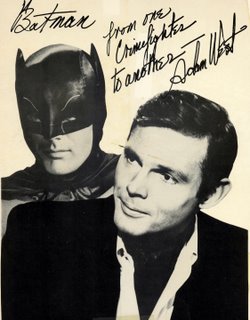 If you've been zipping around the blogosphere lately, you've probably noted a lot of mentions of the Adam West BATMAN TV series. The reason for that is that this week (Thursday, to be exact) marks forty years since the mid-season debut of the series that forever changed comics, the public's perception of them and arguably television as we once knew it.

I watched that first episode at my friend Jeff's house because he had a color TV, lying on our stomachs on the floor of his living room drinking Kool-Aid. The next night and ever after, I was glued to my own TV for each new episode. 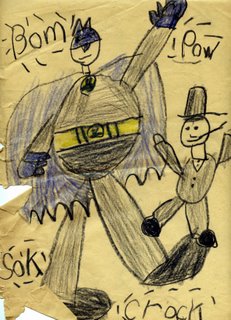 I'm on record as being all about the Bat in my favorite year of 1966. My bedroom wall was covered with Batman stills and posters I sent away for from ads in the comics. I had every Batman toy and game and coloring book I could cajole my hapless parents into buying and my Halloween costume that year was, despite the leftover Zorro gloves, Batman.

At school, we had a lot of free drawing time 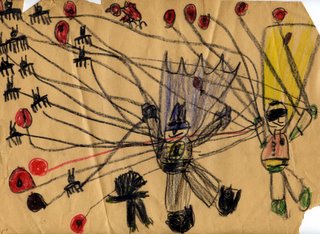 that year and most of my art, some surviving examples of which are seen here, was related to the Caped Crusader and the Boy Wonder. 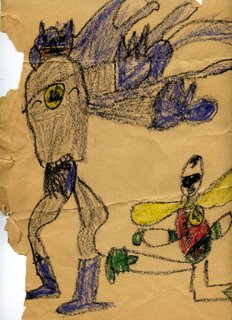 As they introduced Batgirl later on, my first girlfriend Debbie would play Batgirl and I would be Robin. Another friend, Doug, was Batman but he wasn't allowed to walk the four blocks to Debbie's house. For some reason, Batgirl always liked to get tied to the big tree in her back yard and threatened with torture by the Riddler (I doubled as the villain as necessary) before being rescued by Robin. Hey! We're talkin' third graders here. Let's not over analyze it, okay?

In late 1968, after the series had ended its relatively brief but amazingly influential run, we finally got a color TV just in time for BATMAN to turn up in syndicated reruns. I got to enjoy the whole series all over again in color! Just last month, for Christmas, one of my closest friends gave my the special edition DVD of the 1966 tie-in movie so BATMAN continues to be a part of my life all of these decades later.

Throughout the years, disparaging remarks have been made about the show and certainly its all-pervasive influence is STILL having negative effects but taken on its own, as a parody of the super-hero genre, it is a unique masterpiece of comedy. It should never have influenced anything, particularly the comics themselves which had JUST become more serious after a decade of "Fruit Striped Batman Vs. the Blue Aliens From Smidge" tales! The series should, however, be enjoyed. Thanks, Adam. Thanks, Burt. Thanks, Yvonne. 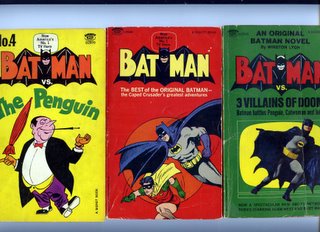 Oh, by the way, on the back of the BATMAN paperback pictured it says that "the editors of Signet searched the secret files of BATMAN-files dating back to the early 1950's-to bring you the first adventures..." First? Fifties? Uh...didn't Batman debut in the late 1930's as opposed to the early 1950's? Oh, and why is the Caped Crusader depicted as falling down on the cover? (In the original, classic Carmine Infantino illustration from which this was adapted, he was crouching.)
Posted by Booksteve at 2:02 PM