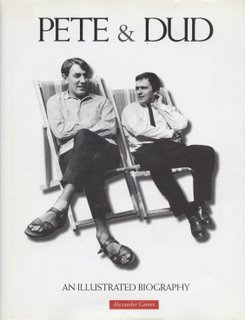 Comedian Peter Cook died on this date, my birthday, in 1995. He had long been a favorite of mine and yet, like many celebrities if you think about it, I knew precious little about him. What I did know was that he, often but not always with sometime partner Dudley Moore, made me laugh out loud…a lot.

I had, of course, seen him in the great sixties comedy, BEDAZZLED as well as various other films, the first episode of BLACKADDER, SNL, THE SECRET POLICEMAN’S OTHER BALL, and even episodes of WHOSE LINE IS IT ANYWAY? I may be one of the few who immensely enjoyed his failed attempt at a US sitcom, THE TWO OF US. I even had a Derek and Clive album!

Since his death I got hold of a copy of the original BEYOND THE FRINGE soundtrack album. This was the stage play featuring Cook, Moore, Jonathan Miller (who went on to be a world renowned Shakespearean expert as well as a physician) and Alan Bennett (England’s most beloved, if dreadfully boring, modern playwright) in the early sixties. Although I personally found it only amusing in fits and starts, I recognized that it was hailed as the beginning of the British satire boom and strongly influenced everyone from David Frost to Monty Python to Lenny Henry and beyond. 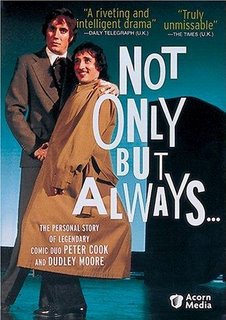 This weekend, I saw the film, NOT ONLY BUT ALWAYS, a UK telefilm biography starring Rhys Ifans as Cook and Aidan Mcardle as Moore. Based on the biography seen here (which I purchased through AMAZON UK a few years back), 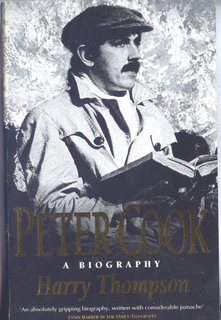 the film deals with the incredibly dysfunctional "romance" between the pair. Both champion overindulgers and philanderers, Cook, although lionized by everyone from Groucho to John Cleese, seems to be jealous of Moore’s talents (including success with the ladies) and attempts to constantly show his superiority by putting down his partner in the meanest possible terms. The diminutive Moore clearly admires Peter’s quick, clever wit from the beginning and yet nurtures growing resentment that ultimately leads to his breaking away and, as unlikely as it sounds, becoming a leading man and a huge box office attraction in the US for quite a few years! Cook’s jealousy won out after that and he ultimately drank himself to death.

Rhys Ifans, so likable and fun-loving in the wonderful DANNY DECKCHAIR, captures Cook’s look and mannerisms to a "T", making him by turns charismatic, caustic, evil and horribly, horribly sad. Mcardle’s Moore is played a bit more as victim than perhaps Dudley was in real life but at times, again, he captures the essence that was "Cuddly Dudley."

Like most two hour bio-pics, there are anachronisms, combined characters and compressed time but what’s there really gives you the feeling that you’ve gotten to know the people behind the masks…and that’s not necessarily a good thing. 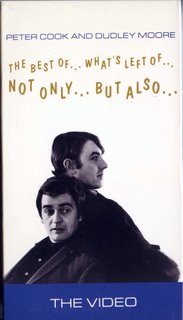 I still find myself fascinated by Peter Cook, and the "One Leg Too Few" sketch will undoubtedly continue to make me laugh for years to come but Cook, the man, like many comedians before him, was not all that funny and not someone I would actually want to be around. I just find that sad. Sigh.

In order to see,hear and read about some of Cook's best, you should quickly go here: The Establishment - from the Peter Cook Appreciation Society
Posted by Booksteve at 4:05 PM