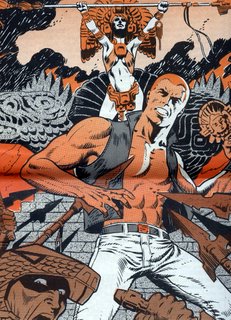 This weekend, the ever-popular website,This is Pop! is offering a large selection of DOC SAVAGE pulp covers so it seemed like a good time to do the DOC SAVAGE piece I'd been meaning to do.. Clark Savage, Jr., AKA "Doc", was originally a pulp hero of the 1930's who, along with his team of experts (and comic relief), the fabulous five, righted wrongs throughout the world. Author Lester Dent created the character and wrote most of the monthly issues under the publishing 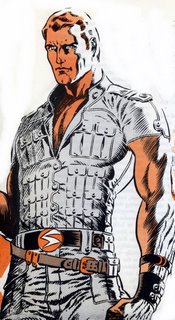 house pseudonym, Kenneth Robeson. (It's my understanding that Dent did not create or write THE AVENGER, also credited to "Robeson.")Doc was revived in a long-running series of paperback reprints (and eventually new material by Phillip Jose Farmer and others) that ran through the seventies and eighties. During the mid seventies, though, the series' popularity peaked. During that period, you had Ron Ely as Doc in the not completely unworthy George Pal feature film, DOC SAVAGE, THE MAN OF BRONZE (a much better variation on Doc would come along later as BUCKAROO BANZAI!) and Marvel Comics (ever the bandwagon jumper) offered both a color (drawn by Ross Andru) and a later, better black and white version. 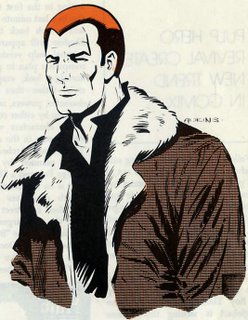 In fact, the picture at top is a detail from Jim Steranko's cover to Marvel's 2nd color DOC SAVAGE issue. This particular image, however, is taken from the cover of the very first issue of Steranko's newsletter, COMIXSCENE (which would change its name more times than Liz Taylor changed husbands). Inside that issue was a big article on Doc and a centerfold in which were presented various drawings of Doc as he would have appeared had other Marvel artists been given the nod. Thus we have here, Steranko's own variation as well as illustrations of the Man of Bronze by 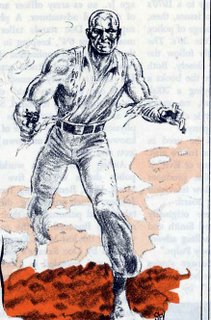 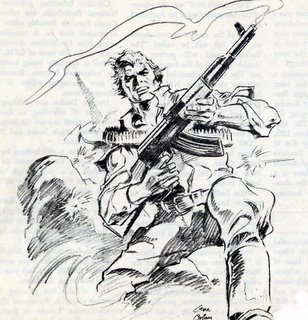 Gene Colan (not that you could really tell that's Doc) and, 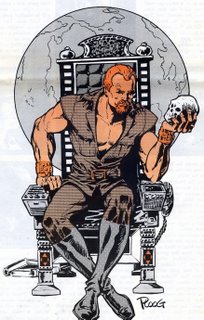 my favorite, Mike Ploog with his off-model, Hamletesque version.
Posted by Booksteve at 4:32 PM