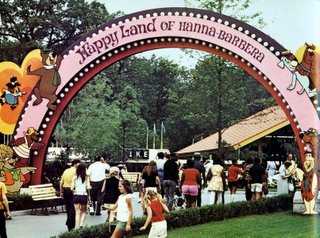 Wow! Yesterday’s Kings Island post seems to have hit a cord with just about everyone so lets talk about it a bit more. Many people cited the classic BRADY BUNCH episode from November of 1973 (and if you haven’t read Barry Williams’ behind the scenes stories of THAT in his book, GROWING UP BRADY, go do so now. We’ll wait.) THE PARTRIDGE FAMILY also did an episode at Kings Island that featured Keith falling in love with an older park tour guide played by Mary Ann Mobley. Locally, they even ran a "making of" TV special about that episode at the time of its initial airing. 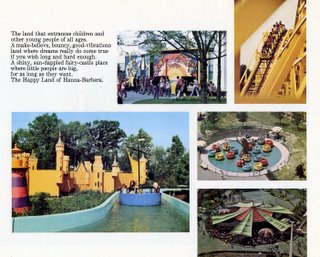 I always liked the way the motif presented characters that hadn’t been on TV in years. Tell me they weren’t aiming just a little for that nostalgia market. Here we even have some shots from inside the legendary Enchanted Voyage water ride which was set up like you were travelling right through a giant TV set. 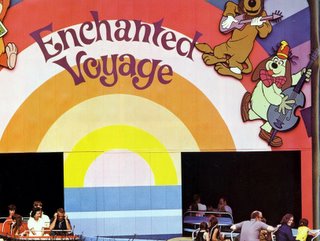 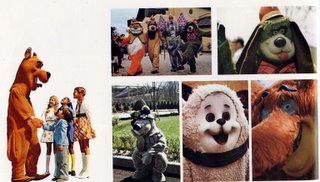 Note that giant Gulliver from a show that was already gone by the time the park opened! 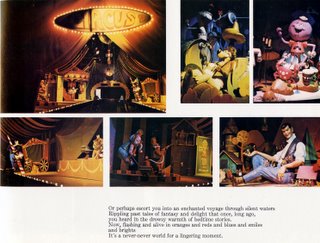 And Squidley Diddley! Oh, and check out that telephone behind Fred and Barney. We really were living in the stone age. We just didn’t know it. Kings Island was the first place I ever saw a video game, though, when they got an early Pong machine. I remember that it was big and bright yellow and most of the guests seemed intimidated by it, opting instead for the classic pinball machines in the Arcade and leaving Pong for me. Hehehe! Over the next few years, they got more and more video game machines, eventually, of course, squeezing out most of the pinball machines! 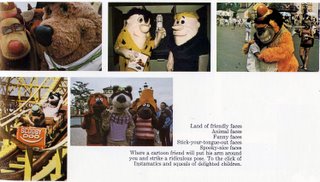 If you still want more, author Charles Jacques, Jr., who’s already chronicled the legends of various amusement parks around the US, is working on a Kings Island volume so watch for it!
Posted by Booksteve at 7:49 AM