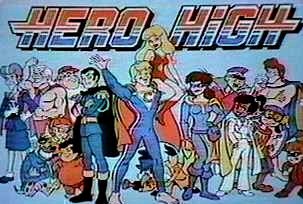 A reader named Greg said that no one he knew could recall a cartoon that featured a surfer super-hero. This was the best pic I could find but I assume, Greg, that you're thinking of HERO HIGH and Captain California. This segment aired, along with the animated SHAZAM, as part of Filmation's KID SUPER POWER HOUR back in the early 1980's. There were also live action wraparound segments
a la' the BANANA SPLITS that featured some of the characters. Hardly Filmation's shining moment, though. I have yet to see SKY HIGH but I'll be curious to see if it's similar. Thanks for reading, Greg! Next Question?
Posted by Booksteve at 10:06 PM