As a child, I LOVED Cincinnati's Coney Island amusement park. A visit was the highlight of every summer. At the end of the 1971 season, however, Coney Island as we knew it closed and was replaced far north of town with Kings Island--bigger, flashier, cleaner, harder to get to and not nearly as much fun. My family and I would dutifuly go every summer but it actually got to the point where I'd let them go without me. 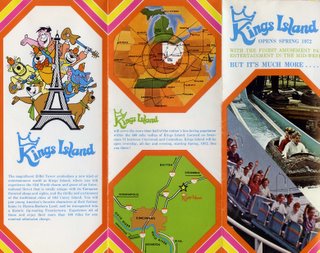 Still, the highlight for me, even though it was designed for younger children, was the area of the park called Hanna-Barbera Land. Taft Broadcasting was the major owner of KI and Taft had also recently purchased (in retrospect perhaps with an eye toward "Disneyfying" their new amusement park) Hanna-Barbera. 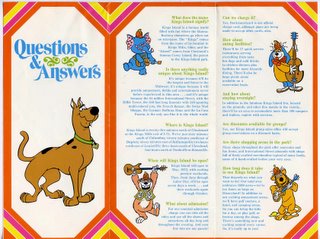 Zoom in on these pre-opening flyers for more details. Somewhere I have a picture of my dad posing with the Banana Splits. The last time I was there (before Paramount took it over) I posed for a shot with George Jetson and a Smurf.

Perhaps surprisingly, I haven't been back since my son was born 9 years ago but he loves cartoons. I think he would have liked Hanna Barbera Land.
Posted by Booksteve at 6:41 AM