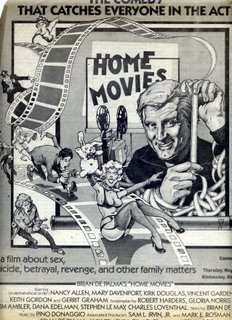 Haven't done any movies in awhile but here’s one that seemed to slip through the cracks. I just wish I remembered more details other than the fact that I really liked it. Brian De Palma’s HOME MOVIES is not Brian De Palma’s ACTUAL home movies but an unusual little film comedy-drama shot by the famed director and a number of his film students. Originally shot on 16MM film and with a cast made up of veterans of other De Palma pictures, HOME MOVIES tells the story of a young film student (future director Keith Gordon) and his attempts to film his own real life a la his idol, "the Maestro" (Kirk Douglas in a fun, scene-chewing performance) in order to get the girl (De Palma’s then wife, Nancy Allen in her trademark lingerie scenes).

Since De Palma is acknowledged for appropriating (some might say stealing) other director’s styles in his own films (notably Hitchcock’s in DRESSED TO KILL), this adds several layers of irony to HOME MOVIES. It seems to be available on video and/or DVD but I’ve never seen it in stores. In fact, the only time I saw HOME MOVIES was in an early eighties arthouse. Call it a school project if you will but a school project from a student of film as good as Brian De Palma as well as HIS students deserves a wider audience. If you’re a student of moviemaking, find a copy of HOME MOVIES for a unique film experience. In the meantime, enjoy this original ad.
Posted by Booksteve at 7:23 AM