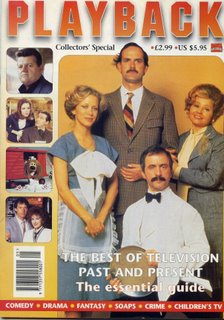 One last British post...well, maybe. Anyway, what you see here is the PLAYBACK COLLECTORS' SPECIAL, a Marvel UK Magazine from a few years back that offers capsule histories/reviews of 50 of the most popular TV series in UK history.

Along with FAWLTY TOWERS, THE AVENGERS, DR. WHO and EASTENDERS, several US TV series like STAR TREK, TWILIGHT ZONE and THE SIMPSONS are included. The real fun of the matter for the anglophile, however, is to read up on the items that never traversed the pond. EDGE OF DARKNESS, Z CARS, CRACKERJACK and BLUE PETER fascinate simply because they can't be readily viewed here in Kentucky.

This was supposed to be a special edition preceding a regular monthly PLAYBACK but I haven't been able to determine if that ever came about. I know this was the only issue I saw...but its a good one!

While we're on the subject of British TV, thanks to my Fink mate, KK,Jr., for turning me on to my new favorite UK series, LIFE ON MARS. Go here and discover it yourself: BBC - Drama - Life On Mars
Posted by Booksteve at 6:41 AM