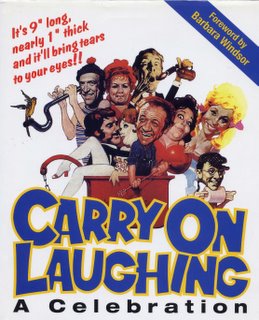 If you live outside of the UK, it’s entirely possible that you may never have heard of CARRY ON. Too bad. I guess I was privileged in that, along with the Three Stooges and Abbott and Costello, I grew up watching old British comedies starring the likes of Bob Monkhouse, Cliff Richard and the Belles of St. Trinians. I had long been fascinated by the occasional review or other mention I would see of the CARRY ON films but, except for the original CARRY ON, SARGEANT, they never, ever turned up on TV. In the early 1980’s that changed as several of the earlier comedies turned up in a package picked up by a local independent channel and I became hooked. 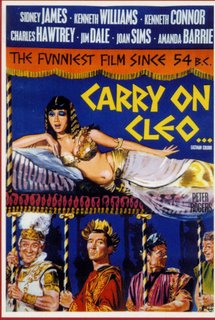 The best word to describe the humor is "bawdy." It isn’t really dirty but at the same time much of it would be questionable in a workplace environment. It’s burlesque, music hall and vaudeville with leering double entendres and pies in the face all delivered by one of the biggest ensemble casts in the history of film, mixing and matching from one movie to another.

Beginning in the late fifties with the aforementioned CARRY ON, SARGEANT (which actually starred future Doctor Who, William Hartnell) the series continued MAD-style parodies of films 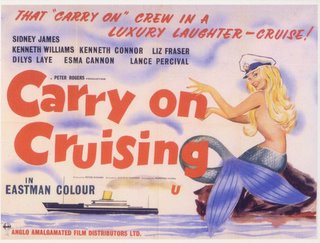 and genres up through the early seventies. There were even ventures into stage and television and an attempted revival in the early nineties. Unfortunately, by that point, most of the series brilliant rep company had died and the new folks just weren’t the same.

In fact, the cast was everything with CARRY ON. The main players were:

Kenneth Williams- Prissy, effeminate and stuck up, his broad, camp delivery was hilarious. He was hugely popular in England (Peter Cook wrote material for Williams early on) and published several books and autobiographies as well as his diaries. 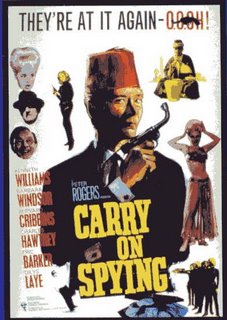 Sid James-A big, boisterous Archie Bunker type with a perpetual grin, little fazed Sid in these films. Although hardly a leading man type, Sid was probably the best straight actor in the series. 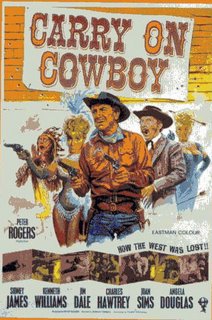 Charles Hawtrey- Tall, skinny, bespectacled and with a uniquely swishy delivery, Hawtrey, too, became immensely popular to the point where he’s even mentioned by John Lennon in the ad-lib that opens the Beatles’ LET IT BE album. 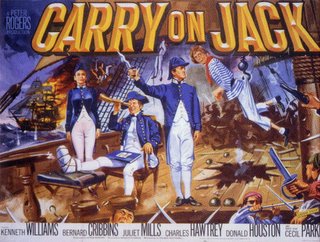 Barbara Windsor-All teeth and giggles and cleavage, she was the typical burlesque cutie but with a great scream also.

Hattie Jacques-The quintessential "fat lady" matron character, she’s usually someone’s angry spouse but sometimes, such as in CARRY ON CABBY, shines on her own.

Joan Sims-The long-suffering wife stereotype, she was rarely given anything to do but was always a familiar presence.

Kenneth Connor- Short but reasonably normal looking, he was often what passed for a leading man. 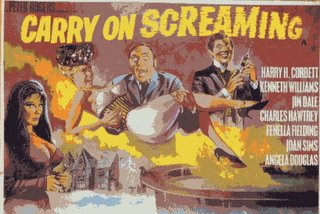 Jim Dale-Although he didn’t really appear in many, his roles were pivotal and he was the only major star of the originals to return for the ill-fated CARRY ON COLUMBUS. Dale, of course, went on finally to world-wide fame as the award-winning voice of the Harry Potter series on audio (unless of, course, you’re in the UK itself where the great Stephen Fry has that distinction). 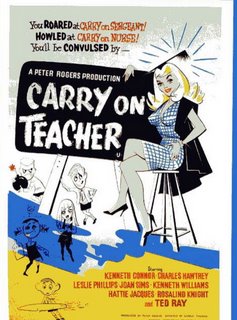 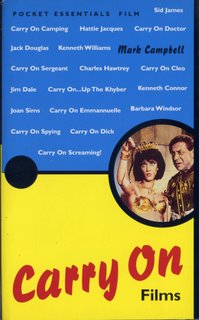 There have been a number of books published on the CARRY ON series in England but I’ve only managed to snag a couple here. The first twelve films, along with a 1977 feature-length documentary, were released on DVD in the US a few years ago but didn’t sell due to lack of the recognition factor. 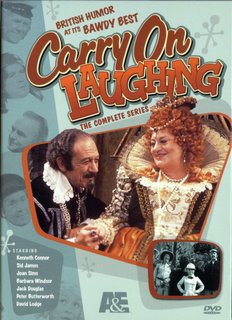 The TV series met a similar fate. Earlier, the same thing had happened when many of the later CARRY ON’s were released on cheap, sell-through video. 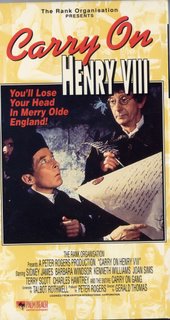 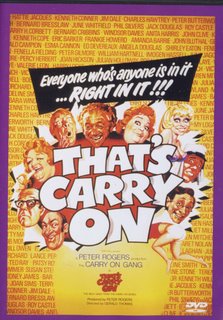 In this country, the CARRY ON movies may be an acquired taste. They're generally not as smarmy as Benny Hill but not as cerebral as Python, a bit more frenetic than ARE YOU BEING SERVED but not as deadpan as MR. BEAN. All I know is that I like to laugh and the CARRY ON movies never fail to make me do so. I love British humor!
For more on CARRY ON, here’s an excellent websource: Carry On Line - The Latest Carry On News
Posted by Booksteve at 8:14 PM