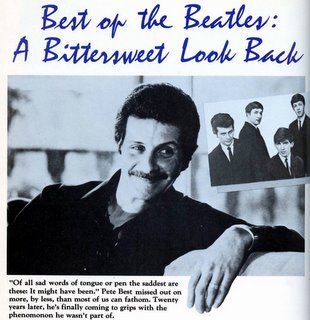 The Beatles' ex-drummer understandably puts a positive spin on his time with the pre-fab Fabs in this 1982 interview but I find some of his claims a bit much. Rather controversially replaced by Ringo in 1962, he has emerged in a comeback attempt every few years since then, appearing on chat shows, game shows, at Beatles conventions and once going so far as to release an all-new album with the entirely accurate but amazingly misleading title, BEST OF THE BEATLES. This particular interview appeared in OUI magazine, at the time much more of a PLAYBOY clone than the sleazefest it eventually became (in other words, it really did have good articles). Best claims that he had handled all of the Beatles business interests and even advised Brian Epstein after he entered the picture. He claims herein that he was more popular than the rest of the lads and that he was let go because they were jealous. When asked who was the "sexual star" of the group in his day, he points to himself and says "...the opportunities were there and I think everyone claimed it. It's just that some of us got a little more than others." Oh, and he naturally owns up to being a much better drummer than Ringo. It's hard to blame Pete for 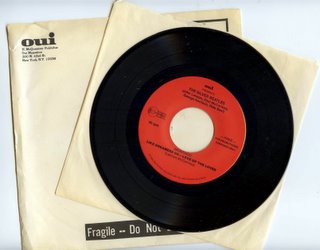 any sour grapes and by all accounts, he's a very nice guy. Still, reading this interview makes you wonder just where the truth lies in the whole story.

Anyway, the real reason to buy this issue was because they were giving away a free record featuring two previously unreleased Beatles recordings with Best! Okay, okay, the songs in question, LIKE DREAMERS DO and LOVE OF THE LOVED, had been heavily bootlegged for years but still, this was the first legitimate(?) release. To this day, I can't figure out how they actually got the rights to these songs and Best, in his interview, skirts the issue by simply stating that he wasn't involved in the legalities. Credited as "OUI presents the Silver Beatles," the 45 was sent in the mail after you returned a coupon from the mag. It arrived in just the plain envelope seen here so I'm surprised it remained uncracked.

OKAY, I ADMIT IT!!! I had another motive for buying this issue of OUI (as if the title of this post wasn't a giveaway). It was the now somewhat infamous Linda Blair issue! 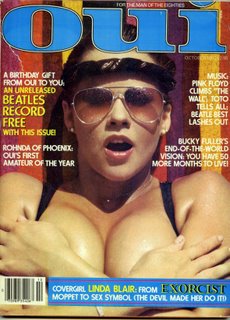 Week after week since my previous Linda Blair posting, the top keywords leading folks to my site have included "LINDA BLAIR NUDE" or "LINDA BLAIR OUI." People, I'm telling you! She's about so much more than that! She's a caring, charity minded, athletic, funny human being! I am most certainly not going to cheapen myself or Linda by running anything other than the cover of the issue (which also featured Buckminster Fuller, Pink Floyd and Orson Bean). The pictures--even outtakes!--are all over the Internet anyway...not the I looked them up or anything. Ahem!Oh all right, maybe one pic 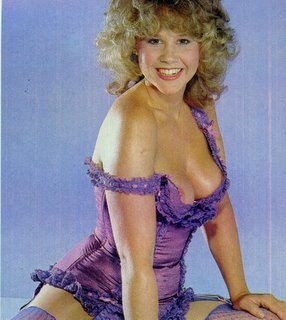 just so those of you who found this site with your naughty keywords don't feel that I've misled you. Quite frankly, I don't care how you found the site. I just hope you enjoy it.
Posted by Booksteve at 9:01 AM