Although the humor is quite different, Asterix and Obelix (see yesterday's post) were physically reminiscent of the great Hollywood comedy team of Laurel and Hardy. I first heard of Stan Laurel and Oliver Hardy when, as a child, I received the record seen below. It was a tie-in to Larry Harmon’s L&H cartoon series that wasn’t playing in my area so I wasn’t at all sure what to make of it. 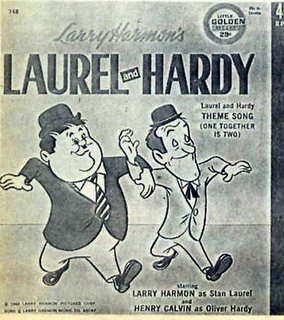 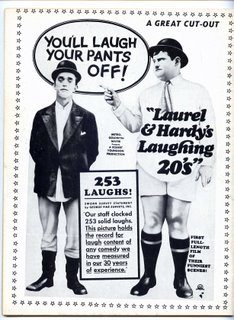 A few years later, the Liberty Theater in my hometown closed for good, going out with an extravaganza of cartoons, FRACTURED FLICKERS and one of Robert Youngson’s loving Laurel & Hardy compilations (all for a dime and with free popcorn!). I became so enamored of the comedians and their civilized chaos, I returned twice that week. 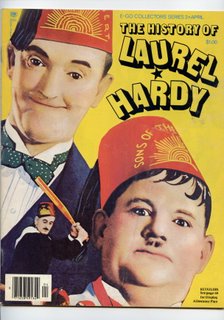 What really hooked me though, along with William K. Everson’s tome, THE FILMS OF LAUREL AND HARDY, was the magazine pictured above, THE HISTORY OF LAUREL AND HARDY. Technically, E-GO COLLECTOR’S SERIES # 2, this was one of a series of well-researched and compiled fan-oriented magazines that covered individual subjects including Sherlock Holmes, Robert Redford, John Wayne and Henry Winkler. Written and edited by big-name west coast fans, the editorial staff included Ron Haydock (former actor and controversial monster mag editor), Don Glut (sometime Marvel writer, fan filmmaker and reknowned dinosaur expert), Paul Blaisdell (actor and filmmaker) and Jim Harmon (Old-Time Radio expert, Tom Mix buff and the editor of next month’s IT’S THAT TIME AGAIN 3 featuring my own debut short story. Order now from BearManor Media ).

Featuring short but loving articles on various aspects of L&H films, merchandising and fandom, each heavily illustrated with rare art and annotated photos, I got more of the essence of the comedians from this than any book. I went on to buy John Mccabe’s books, however, as well as any and all other volumes I could find on the boys. In my mid-teens, pre VCR, I would often try in vain to stay up for late period L&H comedies on the late, late, late show. Eventually, with cable, VCRs, TCM and DVDs, I was able to see nearly all of the available output of Laurel and Hardy and their "reciprical destruction" comedy.

The folks behind this wonderful series of magazines went on to try a regular mag entitled TV’S DYNAMIC HEROES but it didn’t last, possibly due to Haydock’s untimely death (but maybe not. I’m not certain of the timing). Many of them later turned up at Marvel doing their more adult FM clone, MONSTERS OF THE MOVIES, edited by Harmon.

If you've seen Laurel & Hardy, you probably love them. If not, give them a try. There is no one else really like them in film history. Here's a link to one of several knowledgable L&H pieces by the ever entertaining Mark Evanier: Laurel & Hardy Filmography - Page 1
Posted by Booksteve at 9:56 AM