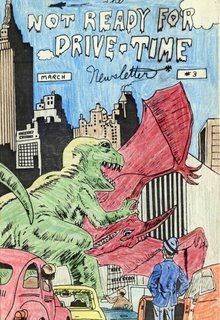 In the early eighties, along with my friend and trivia partner, Terri Riegler (as Creative Differences, Limited), I published some twenty odd (and they were that!) issues of THE NOT READY FOR DRIVE-TIME NEWSLETTER, the official monthly organ of our radio trivia team, the Not Ready for Drive-Time Players. Content-wise, these mini-mags consisted of recaps of the previous month's radio trivia contest scores, "Playmate" style profiles of players, games, editorials, film reviews and (surprisingly) letters and paid classified ads! The fun parts were the front covers. For each issue, Terri (going under her nom-de-trivia as "Roxy") and I would decide on a pop culture related cover. One of us would design it and one or both would do the artwork. After about 25 subscription copies were printed on the copy machine of a great metropolitan newspaper (at 2 AM. Shhh!), we would then alternate coloring EACH INDIVIDUAL COVER by hand! Whew! Luckily (?) 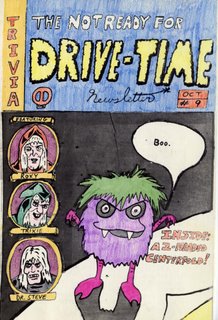 we never pushed for more subscriptions! The biggest exposure these have seen was in a 1992 issue of David Kraft's COMICS INTERVIEW where a selection of black and white covers were reprinted.

Seen here are the Wally Wood related covers. Issue three features a cover lovingly traced and colored by Roxy from Flo Steinberg's BIG APPLE COMICS. Credited there to multiple artists, the dominant style is that of Wood. This issue, the first after the artist's death, features my heartfelt editorial about loss.

Issue 9 is my EC tribute cover, featuring a comic Wood-like monster. This was also my very first use ever of Woody's trademark Zipatone screen work.

Issue 17 features the real thing. Although unnoted in any checklist of Wood's art, this issue featured an actual cover by Wally Wood (or perhaps Woody's assistant Paul Kirchner according to Bhob Stewart.) 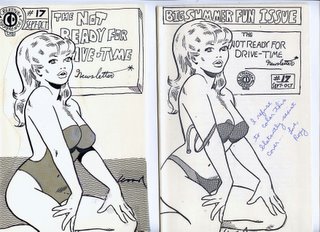 I took my Friends of Odkin original sketch of Wood's SALLY FORTH and added a Zip bathing suit (at left). This version actually never ran, though as we opted eventually to go with an even more risque version as seen on the right. Note Roxy's hand-written (on every copy) "refusal" to color this issue due to the sexist cover.
Posted by Booksteve at 11:23 AM