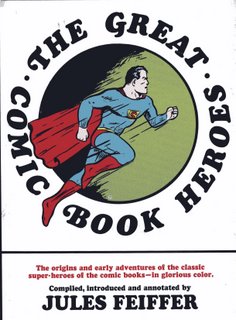 I had begun collecting comic books in 1966 (as had many others due to the phenomenon that was BATMAN) but it was not until the early seventies that I knew they wrote histories of the darn things! Along with Steranko's HISTORY OF THE COMICS and ALL IN COLOR FOR A DIME, the four books pictured here were among the earliest books about comics.

Jules Feiffer's book, THE GREAT COMIC BOOK HEROES came first in 1965. I grabbed it as a bargain book reprint circa 1971. The author, as you may know a cartoonist himself of some reknown, offers a series of nostalgic essays on the early days of comics. Fascinatingly, in the Will Eisner chapter, he manages to completely leave out the fact that he himself was once an assistant to Eisner and actually wrote quite a few classic SPIRIT stories! The meat of the book for my pre-teen self, though, was more golden age reprints than I had ever seen in one place up to that time! Batman, Superman, Wonder Woman, Sub-Mariner and my very first exposure to the original Captain Marvel! Already owning the Harvey Comics SPIRIT issues, I could never figure out why that character was dressed in white in his reprint here. When the book was reprinted again a few years back, Feiffer's prose was deemed the most important factor and thus, probably due to rights issues, the reprints were left out. 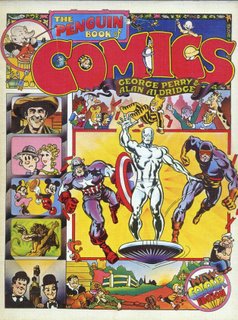 THE PENGUIN BOOK OF COMICS was originally published in England in 1967. This is the revised 1971 edition and it was a revelation to me. I had no idea that comic strips were international! I guess I just myopically assumed that all the comics I knew were all there were. Sigh. This tome delves into pre-history with cave paintings and greek frescos. Then we see quite a bit of the early British tabloid comics. In fact, we're well past page 100 before we even get to US comics of the early twentieth century. Eventually it touches on comic books as part of the larger worldwide pop art phenomenon. This book introduced me to Barbarella, PUCK, Fritz the Cat, Garth and Fred Bassett.

COMICS-ANATOMY OF A MASS MEDIUM was a 1971 German book that deals with comics in a more-or-less scholarly fashion in spots and a bit exploitatively in others. 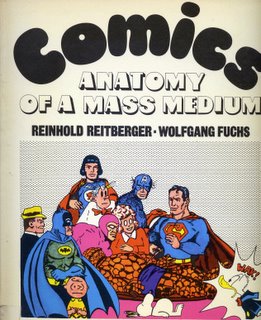 Lots of good black and white illustrations, though and it introduced me to Carl Barks, the Underground movement and the whole concept (remember I was 13!) of nudity in comic books and strips everywhere in the world except the US, the "land of the free."

Finally, Les Daniels offered COMIX-A HISTORY OF COMIC BOOKS IN AMERICA with a cover that must have been somebody's idea of pop art but...ugh! Although riddled with errors, Les offers an enthusiastic look at his subject that introduced me to EC, Kurtzman and 8 pagers! 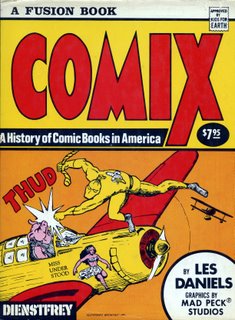 There's also a nice selection--not the usual stuff--of sideways black and white (and some color) reprints that include Barks, Steranko and Graham Ingels as well as the Fox and the Crow! Les resurfaced in relatively recent years doing the "official" histories of Batman, Superman and Wonder Woman as well as the very pretty "official" coffee table histories of both Marvel and DC.

There have been other, better books on comics since these (many of them written by Ron Goulart but the best by Gerard Jones!) but these will always be special to me because they fired up my sense of wonder and that's why we all read comics in the first place, isn't it?
Posted by Booksteve at 9:20 AM