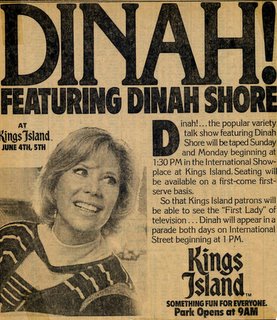 Besides THE BRADY BUNCH and THE PARTRIDGE FAMILY, there was at least one more TV show that was shot at Kings Island amusement park outside Cincinnati. This one I actually attended: DINAH! Seemingly ageless Southern chanteuse Dinah Shore was still near the top of the talk/variety show market with her syndicated series when the show visited the park. Clearly, according to the ad, it was on June 4th and June 5th. Since I'm pretty sure that it was on a Saturday and a Sunday, that would seemingly place it in 1977. The problem, with that was that my high school graduation was on that Sunday and that's the day I thought we were there. Maybe it was Saturday.

Anyway, it was fun to watch. The show was set up in a semi-open amphitheater and Dinah's guests were comedian and Rat Pack member Joey Bishop, golfer Nancy Lopez, Reds catcher Johnny Bench (who was also on THE PARTRIDGE FAMILY episode) and the pop soul group, the Spinners (who did a fantastic version of Rubber Band Man wearing suits the color of fried eggs!). The real fun was the weather which twice pre-empted the taping with unexpected showers prompting a fast retreat from the stage for the celebs and several attempts at retakes on "spontaneous" scenes after everyone's hair was dried. Overall, though, much fun and Dinah looked and sang marvelously, having been a star for nearly 35 years at that point in an industry known for regularly jettisoning talented women.
Posted by Booksteve at 4:53 PM