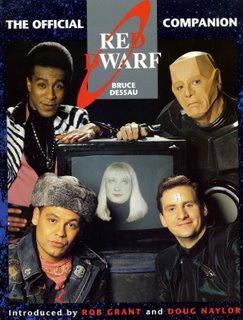 Continuing to mine the British comedy vein I've been in this week, let's catch up to the mining ship, Red Dwarf, from the sci-fi comedy of the same name. For many years my key ring has been the RED DWARF one seen here, 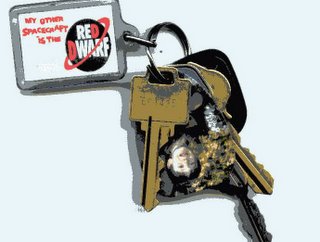 offered free in an issue of the Official RED DWARF "Smegazine" that ran in the UK for awhile (and was often found in US comic shops).Although widely available in the US, for those of you not paying attention, RED DWARF is the story of Dave Lister, the last human left alive. Dave has adventures with his cat, a hologramatic companion, a robot servant and the ship's powerful 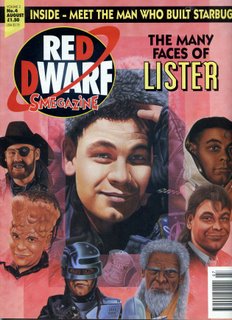 computer. Oh, did I mention that Dave is the ultimate slob, his cat is an evolved, zoot suit wearing humanoid, the hologram is of his biggest rival and the computer has long since become senile?

Begun in 1988 by Rob Grant and Doug Naylor (as "Grant Naylor"), this series has evolved from a vulgar sci-fi sitcom to true, if humorous, science-fiction over the course of eight series. There were best-selling novelizations, a monthly magazine and there's even been talk of a movie. I've been watching the DVDs of season six this morning and if you haven't seen them, the DVD sets are among the best of any series! Each one has new and vintage documentaries with full cast participation. There are bloopers, deleted scenes, isolated music cues, music videos, guest appearances on other programs and cast, crew and even FAN commentaries on key episodes! This is the right way to do a DVD set!

Craig Charles, currently the host of one of those robot war kind of shows, is Dave Lister. Lister is a slob. He hates bathing, likes drinking, messy eating, smoking, screwing (which he can no longer do!) and just generally being vulgar. Found to have smuggled a cat on board the mining ship Red Dwarf, he is put into suspended animation as punishment. When his punishment automatically ends, the ship awakens him. He 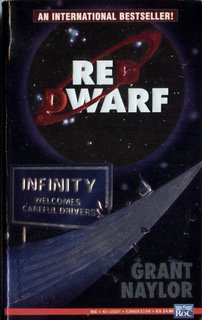 discovers that the rest of the crew had been killed in an accident centuries before but the fully automated ship continued on, even though Holly, the ship's computer, was not running on all circuits.

Lister's cat, Frankenstein, turned out to have been pregnant and over the centuries, its progeny had flourished in isolated parts of the huge mining ship, building civilizations and having wars even as they evolved into humanoid form themselves. The last Cat, Danny John-Jules, is a walking example of feline traits ("If I don't get at least 18 hours of sleep a day, I won't have enough energy for my big snooze!') and mannerisms, always grooming himself and spraying things with a little spray can ("That's mine, THAT's mine...").

Holly attempts to recreate Lister's best friend as a soft light hologram as a companion but since Lister didn't really have any friends, Holly brings back Arnold Rimmer (Chris Barrie), noted brown-noser, incompetent and officer wanna-be. Neither Rimmer nor Lister are impressed.

In a later season, they meet Kryten, the butler droid, played originally by actor David Ross. Utilizing unique make-up, Robert Llewelyn makes the part his when it becomes a regular and was, in fact, the only actor asked to repeat the role in the later American attempts at pilots. 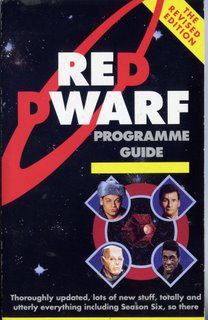 There are lots of sophomoric jokes throughout but somewhere along the way, RED DWARF slowly develops heart and the characters become more real. The stories take on real sci-fi themes and the writers play with elements of the series such as making the Red Dwarf ship itself disappear completely for a couple of seasons before returning, with its entire crew recreated for the final (to date) series! The special effects get better, the sets more realistic but ultimately, it's the evolving relationships between these disparate, stereotypical characters that makes the show stand out and makes me hope they do get around to that film version.

Keep watching THIS site to see when that's likely to happen:Red Dwarf
Posted by Booksteve at 1:52 PM