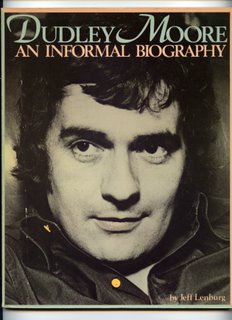 I was going to include this book, DUDLEY MOORE, AN INFORMAL BIOGRAPHY by Jeff Lenburg, in my Peter Cook post earlier this week but apparently it had been misplaced on the shelves. I found it today in the Lenny Bruce section.

As stated before, Dudley, a talented sketch comedian and a natural on jazz and classical piano for the first half of his career became a most unlikely Hollywood leading man for the latter half.

Dudley Moore broke up his on/off act with Peter Cook more or less for good in 1978. He surfaced immediately in a scene-stealing supporting role in my all-time favorite Hitchcockian suspense comedy, FOUL PLAY. This led to his replacing George Segal in the lead role in Blake Edwards' "10," a film that saw "Cuddly Dudley" rolling around naked with the world's latest sex obsession, Bo Derek (to the tune of Ravel's BOLERO yet!) while surprisingly establishing himself as a real actor.

His follow-ups weren't always well-chosen (WHOLLY MOSES, SANTA CLAUS, SIX WEEKS) but his place in cinema history was cinched with ARTHUR, the 1981 romantic comedy about an insanely rich alcoholic man-child who falls for Liza Minnelli (in a variation on her patented quirky role). The film went through the roof and even took home Oscars for the great John Gielgud (as Arthur's butler) and the beautiful but astonishingly overplayed theme by Christopher Cross, THE BEST THAT YOU CAN DO. After a whirlwind turn in the Hollywood lifestyle and a downhill slide on his major films, his last film as a lead was called CRAZY PEOPLE (1990). I enjoyed it immensely. From what I understand, I was perhaps the only one.

After a series of bizarre situations involving a perceived real-life drinking problem and charges of spousal abuse, it was revealed that Dudley Moore suffered from a rare debilitating disease called Supranuclear Palsey. His appearances became sporadic and his later roles were confined to voiceovers. He died in 2002.

My own favorite memory of Dudley Moore is a late seventies-early eighties episode of a PBS show (NOVA?) entitled IT'S ABOUT TIME. This was a science documentary about time that opened with Dudley on piano and continued with a disembodied HITCHHIKER'S GUIDE TO THE GALAXY-style voice explaining the ins and outs of time and its various concepts to him in easy to understand fashion. Isaac Asimov also appears in a skit to demonstrate the impossibilities of time travel. Parts of the show play like a deadpan, educational version of DUCK AMUCK with Dud as Daffy. In the end, I can't help but think that's how he'd like to be remembered-a little daffy.
Posted by Booksteve at 7:06 PM