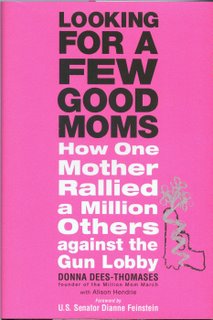 Whew! We're back! Yesterday I mentioned my upcoming first book appearance. Well, that's not the ONLY book I've been in. That's the subject of today's piece.

Okay, now I’ve not decided to go all political on you (although if you WANT that, please visit my wife’s site at View From The Sandbox). No, today I want to take a brief look at the Million Mom March from my own unique perspective. My wife was one of the coordinators of the original Million Mom March for safer gun control in 2000. We had seen Donna Dees-Thomases on TODAY on Labor Day of 1999, talking about how she wanted to rally a million moms to march on Washington in 9 months. Our son was not quite three and we, too, had been scared by Columbine and the Jewish day care shootings. We wanted to protect him any way we could. Let me state flat out right here that neither my wife nor myself have EVER advocated banning guns (She’s actually a very good shot!) and that any comments and/or mail on that will be deleted.

That said, our involvement began when Rene emailed Donna that afternoon and became one of the first women to jump on board (# 9 or # 12, I believe. Not sure at this point.) Donna Dees-Thomases has taken a considerable amount of flack that she was just a Clinton "hack" since her sister-in-law was Hillary’s rather high profile attorney and she, herself, had at one time worked for Dan Rather and David Letterman. All I know is in those first weeks, I personally spent a lot of time on the phone with her with screaming kids in the background as she solicited my advice (and everyone else’s she could get) about promotion of the event.She honestly seemed to feel as if she were in way over her head. Before long, Donna had asked Rene to coordinate moms in the state of Kentucky.

Soon we were driving acoss the state to Louisville and Lexington regularly. Then the TV news started calling. The first time was fun. Rene panicked about the interview and we rushed to clean the house before the reporter showed up. They set up what they wanted, taping shots of 3 year old David reading while sitting on my lap at our library, then adding a voiceover from Rene about the importance of taking care of children.

After awhile, though, it became routine. "Honey, it’s channel 9 again. They wanna come by tonight at 6." Then it became just annoying. My favorite interview she did, however, was on an NPR radio show out of Washington that wasn’t even carried locally. We had to go to the local NPR station where she sat alone in a booth participating long-range with senators and congresswomen in a round-table discussion. David and I watched her talking as if to unseen ghosts from the empty booth next door. When we heard a tape of it later, you’d never know they weren’t all in a room together! Later still, when we were in Washington, someone actually recognized my wife’s name (on one of those big name stickers) from that show as we stood in front of a hotel in the rain at midnight waiting for a cab!

We were interviewed one last time as we packed for the big day. In the preceding nine months my wife, a noted agoraphobic, had gotten together hundreds of moms in Kentucky, raised money (we auctioned off an autographed copy of NRA head Charlton Heston’s autobiography on Ebay to raise money to send moms to Washington) and become much more politically aware. She even had the chance to be on OPRAH but only if we had paid our own way to Chicago and we couldn’t afford it.

In Washington a few days early, we volunteered at the March offices, a rented fifth floor (I believe) where every office was opened up and interconnected. It reminded me of the stereotypical 1930’s newspaper office, with lots of hustle and bustle. Our son, David, liked to filch doughnuts from various desks and then run through the maze of offices giggling maniacally. My job was mostly to keep him from doing so.

We were invited to a reception at Planet Hollywood for the celebrity guests but we arrived late as we had also been at a first-time ever get together for all of the March’s coordinators. Although I enjoyed Demi Moore’s Captain Crunch Chicken (and have since duplicated it here at home), the only celeb we met was singer Melissa Manchester, to whom we had to apologize after David nearly knocked her off a balcony while running around and bopping some other kid with balloons way past his bedtime. Bette Midler had been announced as the headliner at the March concert and her music played all that night at PH and yet she didn’t perform or speak that I saw (and I was there for the whole thing).
Somehow, though, she ended up in PEOPLE posing with other guests so she must have been there. No clue why she didn't perform. 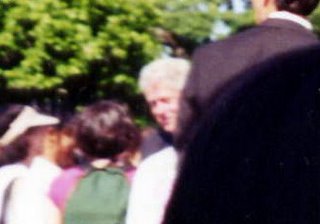 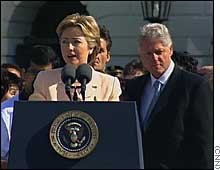 We had to rise early (the bus was at 5AM) the next morning to get through White House security for a planned photo op with the Clintons. It had grown from being an intimate breakfast for fifty inside to an audience for 300 or so on the south lawn. Thus we ended up without any food. For some reason (my long ago membership in People for the American Way?) I was initially refused entrance. Eventually, though, the guard said, "You’re with Rene? Then you’re okay." Which made her feel really special.

It was nearly 8 AM by the time Bill and Hillary came out. By that time David was wide awake and running amok again, this time with Congressman John Conyers’ young son on the White House lawn. According to Donna, that day was one of the few times she actually met Hillary Clinton.

As I said, it was a photo op. A nice, uplifting speech from both (and love 'em or hate 'em, the Clintons were two of the most charismatic people I've ever seen!), some hand shaking, then it was off to the buses to the March itself! Rosie O’Donnell had agreed to host the entire day and had promoted the event on her show. As such, she was the official leader of the March. We all lined up what seemed like a mile away from the stage and for an hour or so, security people positioned everyone. The crowds gathered from all sides, pouring out of subways and chartered buses. There were banks of press cameras clicking away in front of us all the time and both Hillary and Tipper Gore were right up front with the rest of us. It had rained the night before and the ground was muddy in spots. Eventually, someone signaled (no gunshot, naturally) and we all took off toward the stage. My wife was carrying a Kentucky flag so we were able to see her but she got much further ahead of us, much to her own discomfort, as David and I had to maneuver his stroller around the mud holes and the cameramen. After what seemed like an hour, we reached the other end and made our way to her flag. She informed me that all of the coordinators were to go backstage so we accompanied her. 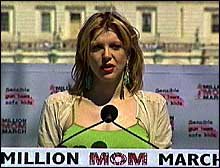 Now this was a bit surreal. Here we were at one of the biggest events of its type ever and yet we found ourselves watching it on a big screen TV set up in a tent backstage 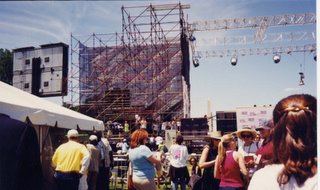 where we had plenty of portable bathrooms, water and constantly restocked snacks free for the taking. Tipper, James and Sarah Brady and even Susan Sarandon wandered in and out of the area as David napped and I was riveted to the screen. 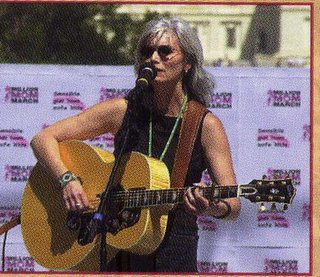 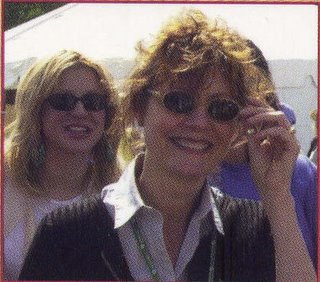 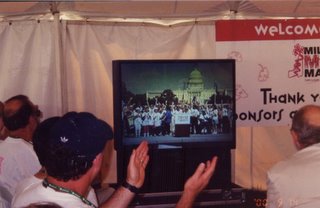 Throughout the course of the day and in between speeches that ranged from heartfelt to overtly political, we watched Courtney Love, EmmyLou Harris, Melissa Etheridge, and even children’s favorite Raffi take the stage. 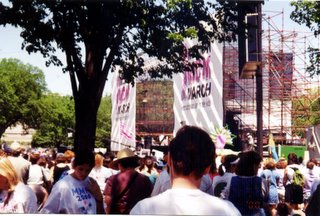 Rene was interviewed by a Japanese reporter who wanted to speak to her in front of the stage so we all made our way out from our seclusion and saw for the first time with our own eyes the massive crowd. The March’s detractors have said that it was really only a few thousand, the Parks Department that day estimated it at 800,000. It was, however, one HELL of a lot of concerned people and at the end of the day’s events, my wonderful wife, the agoraphobic, appeared onstage proudly waving the flag of our great commonwealth as seen throughout the country and the world live on C-Span (we taped it)! 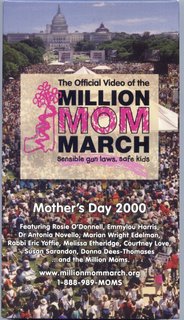 She even appears with Rosie on the back cover of the official video box (with the straw hat) and, along with David and myself, are interviewed on the video. 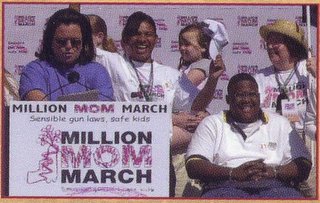 All in all, a very surreal time. Like being there and being a small part of history and yet like standing on the sidelines watching at the same time. We returned home to dwindling press calls, overdue bills and a humdrum job. Even though my wife remains associated with the organization and committed to the cause, all of that work took a toll and she stepped back, as did Donna and many of the founders of the movement. 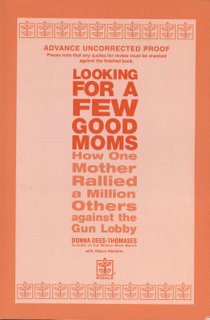 Donna Dees-Thomases covered it all in her book, LOOKING FOR A FEW GOOD MOMS (incorrectly marketed by Rodale Press as a "parenting" book! Unbelievable!) in 2004. Rene, of course, is a prominent character. David appears briefly and I’m actually indexed myself (although…err…Donna misspells my name AND gets the anecdote wrong). Somehow I’m comforted by the fact that fifty years from now someone will see this book’s bright pink cover on a dusty shelf in a used bookstore and read about us and the cause we believed in.
Posted by Booksteve at 10:25 AM