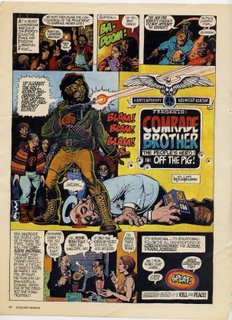 For my 200th post (and they said it wouldn't last) we return to that early 1970's issue of ESQUIRE where several young cartoonists were asked to create the "heroes" of the future. Previously, we've seen Mike Ploog's black version of his former boss's SPIRIT and Berni(e) Wrightson's variation on the underground character, CAPTAIN GUTS. Now, as we segue almost effortlessly from today's earlier post about one of Wally Wood's fabled assistants, we offer another Woody protege, Ralph Reese, along with Alan Weiss and Barry Windsor-Smith.

Reese offers COMRADE BROTHER, a TRASHMAN-style political parody with a definite underground feel. Weiss, a favorite up-an-comer of the day who seems unfortunately to have never really arrived (although he has turned up recently in some of Alan Moore's books!), presents 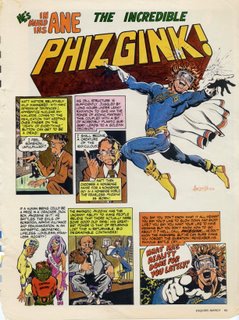 THE INCREDIBLE PHIZGINK!, an allegedly humorous take on the concept of a hippie super-hero. Only Barry seems to have really come up with something really original, a depressing if nicely drawn and colored anti-war parable/poem. 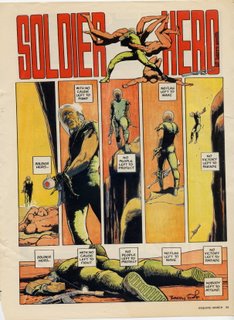 He seems to have missed the point of the exercise, however, but along with Ploog's Eisner-esque piece, this is clearly the best. Note that not a single one of these "heroes of the future" ever actually turned up again anywhere.
Posted by Booksteve at 3:33 PM