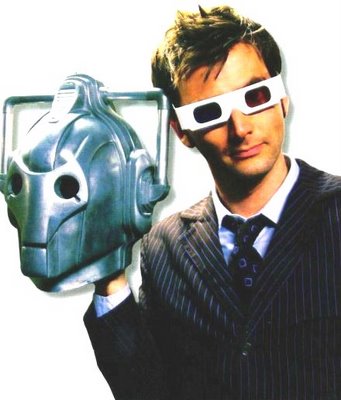 I’ve never really cared for the music of Jackson Browne. It’s the sound of his voice, the songs he writes, the songs he sings. I’m sure he’s a nice enough fellow-doesn’t seem like the hard-partying rock ‘n’ roll poster boy. I just don’t care for his music. That said, I heard a smidgen of his first hit record, DOCTOR,MY EYES, on the car radio the other day and I’ve had it stuck in my head ever since.
Now, though, I have the appropriate visual for that song. Here’s Doctor Who David Tennant from this week’s season-ending two parter wearing his 3-D glasses. After putting them on a number of times over the past two weeks, towards the end of last night’s climactic episode, the Doctor asks, "Isn’t anyone going to ask about these?" and proceeds, albeit with the sad departure of companion Rose, to save the universe…again. With his winning personality, a rubbery face, a tinge of melancholy, a silly sense of humor and a somewhat surprising seriousness when he needs it, Tennant has made the venerable role his own. I wonder what song's stuck in Tennant's head today? Yours?
Posted by Booksteve at 8:31 AM