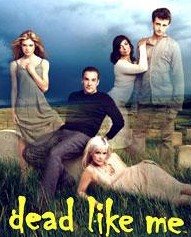 Not having Showtime, I had paid less than no attention to the TV series DEAD LIKE ME until my friend Brittany got the first season on DVD this past Christmas and recommended it highly to me. Strangely enough, it quickly worked its way onto my list of all-time favorite series! Having no expectations at all, I found myself pleasantly surprised. DEAD LIKE ME is, on the surface, either a very black comedy or a lighthearted drama with fantasy elements. It is, of course, both but also so very much more. Borrowing the DVDs, we saw the unexpurgated, decidedly adult versions of the episodes but after awhile, I didn't even mind my 9 year old son watching, too. The series made more valid philosophical points about life and death and love and loss and grief and pain and strength and survival than any ten serious network dramas, all the while making you laugh at dark things you might never have found funny before. The cast was brilliant. Mandy Patinkin, although never a favorite of mine, is particularly effective in DEAD LIKE ME, holding the whole unlikely premise together while trying hard not to let his character be really open to anyone. It's newcomer and star Ellen Muth, though, who steals every scene with her deadpan narration. Looking like Valerie Bertinelli and Eddie Van Halen's daughter, her character grows exponentially throughout the series as she accepts not only her role in life (or death, as the case may be) but herself as well. DEAD LIKE ME was cancelled after two seasons but has just been resurrected in reruns on the Sci-Fi Channel. They cut some of the language and edit a few of the naughtier scenes, but they also seem to have added in some previously unseen takes and additional footage. For a show that literally reeks of death in all its forms, you'll feel surprisingly good about life after you watch it. Go here:SCIFI.COM Dead Like Me for more info on the show itself. Then go rent the DVDs or tune in on Tuesday nights to watch one of my new all-time favorites!
Posted by Booksteve at 8:38 AM