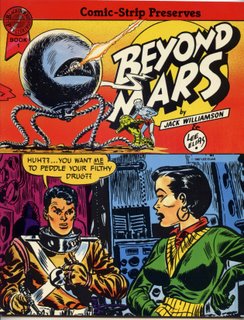 In 1987, Blackthorne Publishing (which had sort of spun off from the former Pacific Comics) put out two thin trade paperbacks that brought back into print the entire run of the rare early 1950’s newspaper comic strip, BEYOND MARS. 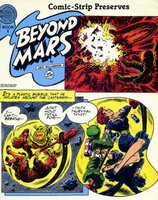 Created by prose sci-fi writer Jack Wiilliamson (who provides a new introduction in Volume one) and comic book artist Lee Elias, here at his absolute Caniffesque peak, the strip was exclusive to the NEW YORK NEWS whose Sunday edition was sold nationally. BEYOND MARS is essentially the adventures of one Mike Flint and his lisping alien worm buddy, Tham…err…Sam set in the universe from Williamson’s novels. Perhaps best known for his DC sci-fi and GREEN ARROW strips and later as a teacher at the Kubert School, Elias lovingly packed a ton of detail into each of these Sunday only strips. There are monsters, aliens, space pirates, space cars and even a flying Empire State Building. Like many of Blackthorne’s Comic-Strip Preserves series, these two magazine sized volumes can often be found for a (filk) song when they can be found at all at your local shop or Con but they’re so much fun you’ll wish the strip had run for years and years! 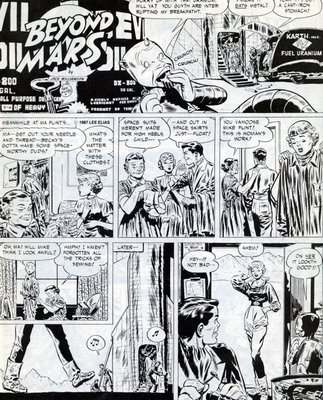