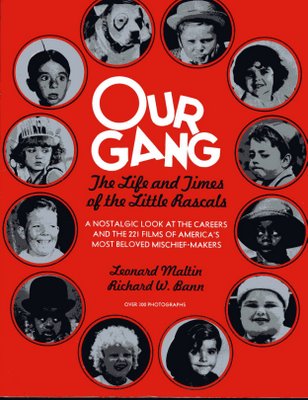 One of my favorite books in my whole Library has long been OUR GANG, THE LIFE AND TIMES OF THE LITTLE RASCALS , the 1977 volume by Leonard Maltin with Richard Bann. As a child, the MGM OUR GANG shorts with Froggy, Mickey and Spanky were early favorites. In later years I came to realize just how self conscious and surreally unfunny most of them were. That realization came largely to the fact that by that time I had seen the earlier, legitimately funny and creative Hal Roach shorts commonly referred to as THE LITTLE RASCALS. The big red book put it all in perspective and I was able to follow the series’ development through the years and see just how the most naturalistic movie kids of all ended up as the jingoistic flag wavers of the early forties. All the films are covered back through the silent days with Mickey Daniels and Joe Cobb. All the behind the scenes issues with family and racism are touched on in the book. In the end we read with sadness and fascination how adulthood and the real world caught up with the perennially youthful celluloid heroes. Drugs, alcohol and early deaths abound and even most of those who do well don’t stay that way forever. For every successful Jackie Cooper, Dickie Moore and Tommy Bond who kept working in the industry, there was a tragic Scotty Beckett or Carl "Alfalfa" Switzer who were eaten up by show biz.

Recently, author Maltin returned to the subject of OUR GANG with a long, informative introduction to the first of Fantagraphics’ set of OUR GANG comics reprint volumes by Walt Kelly. Little known as works by POGO’s creator and equally little known as a popular aspect of the movie series history, the comics have been unavailable pricey collectibles for decades and this series corrects that oversight wonderfully. Re-presenting the 1942 and 1943 issues, we see that Kelly, after initially adapting the style of MGM shorts 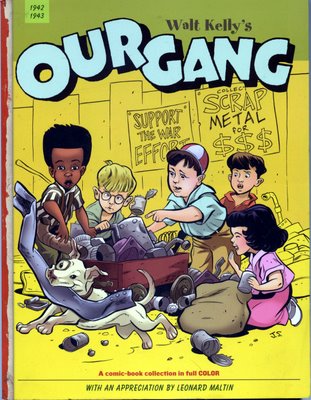 (albeit with much more actual humor!) began to replace departing actors with characters of his own. Thus we lose Spanky early on to be replaced by Kelly’s "Happy." Eventually, according to Maltin’s piece, Kelly goes on to create a uniquely enjoyable kid strip much more in tune with the original Hal Roach comedy shorts. It even outlasts its MGM inspiration by several years and might have continued on if not for Kelly’s more anthropomorphic success with a certain possum and his swamp friends.

If you have this volume (which was sent to me by a reader, thank you very much!) you’ll note that it also features a nice introduction by one Steve Thompson…or should I say one OTHER Steve Thompson. Nope. Not your humble librarian, this one is, in fact, the long-running head of the official POGO fan club and keeper of the Okeefenokee faith. It probably confused the mailman too when I used to be an actual member of the POGO fan club about fifteen years back and he and I exchanged several letters.
Bottom line, for great cartooning you’ve probably never seen, whether you like the movie shorts or not, go to your local comics shop and pick up this volume now so we’ll get to see the rest of the series reprinted, too!
Posted by Booksteve at 12:24 PM