Doctor Who and the Daleks

With DOCTOR WHO nearing the end of its second smash BBC series since last year’s revival, I thought it might be interesting to revisit my very first introduction to the character. I first met the Doctor back when his name really WAS "Who." That, of course, was in the two mid-sixties theatrical movies, DR. WHO AND THE DALEKS and DALEK’S INVASION EARTH 2150 AD. In 1969, both films were in regular rotation on the local UHF sci-fi series, SHOCK IT TO ME.
Based only loosely on the then-still new TV serial with William Hartnell, horror film legend Peter Cushing, as a more familiar name, replaced him in the movies. As the Doctor, here an eccentric but very human Earth scientist, Cushing gives a perhaps surprisingly endearing, low-key performance. He’s so much fun to watch that you almost hate it when Terry Nation’s enduring creations, the Daleks (seen most recently this very week on the revived series) show up and steal the show. Although the first film received poor distribution in the US, it helped cement the already growing Dalek phenomenon in the UK and thus merited a seemingly bigger budgeted sequel. Comedian Bernard Cribbins (a sometime CARRY ON star) joined the Doctor’s companions as a police officer who wanders into the TARDIS (For the uninitiated, this is the Doctor’s time machine. The outside is shaped like a British police box but its impossibly bigger on the inside.) to actually call the local constabulary! By the time I first saw the movies, Jon Pertwee was appearing on British TV as the third Doctor. There was an abortive attempt at syndicating these episodes in the US but not in my area. I learned of the existence of a series when a photo appeared in FAMOUS MONSTERS magazine that was said to be from the series, DOCTOR WHO. 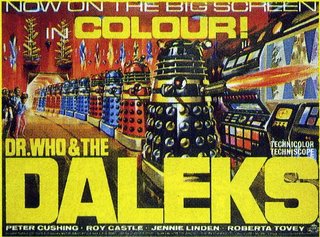 As Tom Baker’s incarnation arrived and became the most popular Doctor to date, the series finally cracked the US market, first in American reprintings of some of the early paperbacks, then eventually on PBS stations. The Cushing episodes were, of course, considered non-canonical and became largely glossed over in the histories of the series that multiplied throughout the eighties.

Finally, in 1995, Marvel’s DR WHO MAGAZINE devoted a long overdue entire Spring Special edition to Peter Cushing’s Doctor. The man best remembered as Baron Frankenstein, Professor Van Helsing and STAR WARS’ Grand Moff Tarkin at long last was given his due as the forgotten Doctor Who…and the ONLY one with a last name to boot!
Posted by Booksteve at 11:05 PM