Movies That Fell Through the Cracks # 13 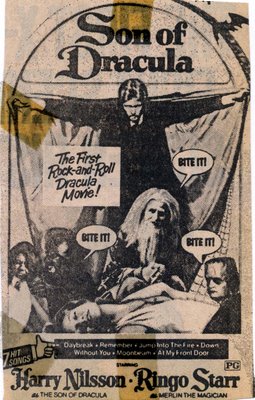 There’s a new documentary making the rounds on singer/songwriter Harry Nilsson. If there’s any justice in this world, renewed popularity for Harry will finally get a legitimate release for 1974’s SON OF DRACULA, a great candidate for one of the worst films ever made!
SON OF DRACULA, billed as "the first rock and roll Dracula movie," had a lot of things against it right from the beginning. First of all, the monster craze of the sixties was on its last legs. Second, Harry and his drinking buddy Ringo weren’t very steady on their legs in those days either. Dennis Price who played Van Helsing in the picture was himself a notorious alcoholic who, in fact, had died from cirrhosis of the liver prior to this film’s decidedly limited release. Ringo produced (which is probably the only reason somebody greenlighted this thing in the first place) and is even co-credited with the editing. Because of the latter, I hesitate to blame director Freddie Francis for all of the long, boring shots of Nilsson’s Count Downe (the son of Dracula) just standing or walking around silently.
The slighter than slight storyline deals with the Count attempting to get Dr. Frankenstein (Freddie Jones who, ironically, had played the monster in Hammer’s FRANKENSTEIN MUST BE DESTROYED) to make him human so he could be with the girl he loves. Ringo appears from time to time mumbling nonsense as Merlin the Magician of all people. This Ringo is light-years away from the one who had gotten Chaplinesque reviews in A HARD DAY’S NIGHT just a decade earlier.
Nilsson’s songs have been memorable additions to many films and TV series including MIDNIGHT COWBOY, THE COURTSHIP OF EDDIE’S FATHER, RESERVOIR DOGS and SKIDOO (in which he sings the entire closing credits including the roman numerals in the fine print! I love that part!). They’re also the only saving grace here. You see, the Count likes to sing and what he sings are songs from Harry’s charttopping repertoire including JUMP INTO THE FIRE, WITHOUT YOU and my favorite, DAYBREAK which was a bigger hit than the movie itself. In one scene he even appears with an all-star band including Keith Moon and (Cincinnati’s own these days) Peter Frampton. Watch closely though as the cameraman doesn’t seem to particularly care about getting any bandmember shots in this horribly lit scene. 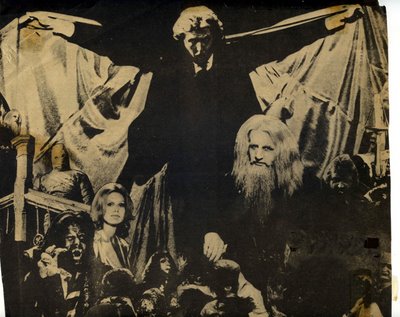 As to Harry Nilsson’s performance, there really isn’t one. I have never seen an actor so obviously not even trying. He could have hammed this up and made it fun but no, he stodgily walks and broods through most of the movie. If you DO find it anywhere, you’ll find yourself fast-forwarding through much of it.
Nilsson as a person is a fascinating footnote in pop history and his songs and recordings deserve every praise and re-release they get but there’s a reason no one even considered Harry for a role in THE ROCKY HORROR PICTURE SHOW just two years later. That reason was SON OF DRACULA.
Posted by Booksteve at 8:27 AM