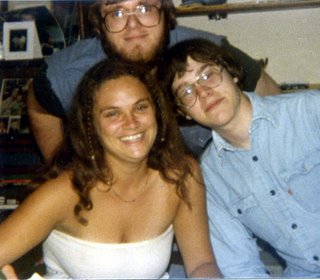 In 1980, I saw a local newspaper article about a man named Pat Stringfield who was putting together a comedy troupe. Having been relatively directionless since graduation (three years earlier!) I contacted him and almost before you know it I was in show business!
After a couple weeks of auditions, weeding and trying to come up with a name, we ended up with a core group of nine serious comedians (Is that a good thing?) to be known forever after as ORSWIC, THE OHIO RIVER SWIM CLUB…because you see you can’t…uh…swim in the Ohio River. It’s too…I mean, it’s illegal even and, uh…Never mind.
That initial group consisted of:
Pat-About 21 years old, he was serious about comedy and good at self-promotion and hustling.
Mindy-Also about 21, she was pretty and a professional actress who would prove to be the sex symbol of the group.
Alex-Just 17 and the only one to show up that first day with an audition tape, Alex already had a comedy radio show on a local public radio station
Joe- A typical sidekick, Joe was Pat’s best friend but seemed quite disinterested much of the time. He would eventually skip two of the group’s three big gigs.
Greg-A bit older and seemingly more professional, he had big plans and ideas.
Cordelia-A Southern belle housewife who would eventually quit because we wouldn’t perform any of the sketches she wrote-they were very dirty but not funny!
Judy-A loud and very stereotypically Jewish lady with a great smile and a great s 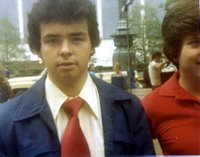 ense of humor that didn’t always jibe with Pat’s.
Ed-a good-looking but obnoxious guy who would perform our leading man roles.
And shy little 21 year old me wondering exactly what I’d gotten myself into!

After weeks of writing and rehearsals in Pat’s basement, Ed’s garage and Judy’s living room our leader got us our first gig at a trendy local piano bar. Somebody had the bright idea that we would pre-record commercial parodies that would run in between live sketches at the bar. This meant more writing and rehearsing as well as filming. Then it meant we had to rig the bar with TV monitors and a VCR the day of our performance. Judy’s disagreements with Pat led to her leaving the group just prior to that first performance. Her parts were 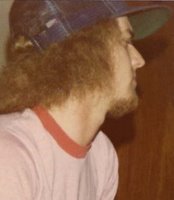 split among Mindy and Cordelia.
Several of the sketches were written by yours truly including one in which I appeared as a vampire attempting to bite a lady at a bus stop. When she yells "RAPE!" I take offense. She responds that nobody would come if she yelled "VAMPIRE!" Our characters discuss it philosophically for a bit until two police officers show up and arrest me. Hilarious isn’t it? And that’s the one I remember!

The only consistent laughter in the house that evening seemed to come from Pat’s giirlfriend Lisa. The club refused to pay us so one of our number (who shall remain nameless) swiped a case of beer from the storage closet we’d been using as a dressing room. Joe hadn’t even shown up. The whole thing was an embarrassment and I pondered quitting. Cordelia and Greg did just that! Still, I couldn’t give up show business so I was back at our weekly rehearsal that weekend. Before the day was over I had been named head writer and talked Pat into bringing Lisa on as a replacement. Pat brought on another young woman named Karen and a second Steve also. We needed new members. Big plans were afoot. 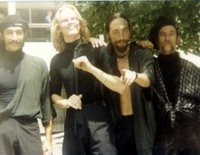 Pat had talked the city of Cincinnati into letting our group host a "Comedy Day On Fountain Square." Our group was to appear in two sketches including a musical number. Pat convinced legendary TV zany Bob Shreve to emcee and famous jugglers the Flying Karamazov Brothers (in town for another show) to appear in exchange for a plug. Even my dad agreed to come see it!
The weather was great and there was a good lunchtime turnout. ORSWIC’s two sketches included my BASEBALL ANNOUNCERS sketch with Ed and Mindy and one of Alex’s or Pat’s political satires in which I appeared as a newsman interviewing street people running for local office. Strangely enough, the rest of the group, acting as the street people, got the musical number at that point. 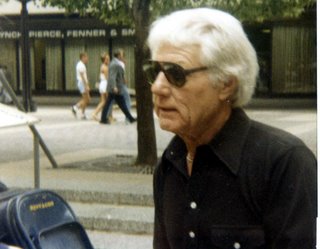 Bob Shreve liked it well enough to invite us on his popular all-night movie/comedy series THE PAST PRIME PLAYHOUSE a couple weeks later. We were given three sketches on the show. Bob wanted my baseball sketch from the Square show (an old-school sports announcer meets his hip new female color commentator) but we also did my EASY STREET LOAN COMPANY which featured my own less than stellar TV debut with Mindy and a friend she drafted at the last minute when Joe didn’t show up…again. The third sketch was one of Alex’s that would have been funny if not for Karen skipping the pivotal line when she noticed a nice closeup of herself on the monitor and Lisa missing her mark so that only her hands made it into the scene.
The Square show was filmed by the other Steve but I never received my long promised copy. I did tape the TV appearance.

After that we wrote and recorded some stuff for a local radio album that ended up never being released. Karen had me working on a solo act for her and I borrowed Lisa and Mindy to form CENTRAL CASTING which appeared on Alex’s radio 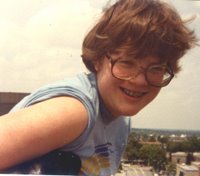 show doing several more of my sketches. Alex even cast us in roles in his continuing space opera spoof, HEADS UP! This led to a memorable line screw-up from Lisa who was supposed to say "Sir! We’ve jettisoned the injured crewmembers, sir!" but who said instead, "SIR? We’ve jet-stoned the insured crewMEMBERS! Sir?" Lisa was not asked back the following week but Mindy and I were, performing multiple roles in a marathon re-creation of HEADS UP! episodes. It was ORSWIC’s last gasp.

After that Karen became pregnant and one of the ORSWIC members was a possible father who wanted nothing to do with it so the group never got together again. I stuck by her and helped her through her pregnancy and the baby’s early months. She even let me name the baby. Then she disappeared, though. Lisa eventually left Pat and we became a real couple just long enough to break up. By 1982, I was working at the bookstore and my comedy career was behind me.
Lessons I learned from my fifteen minutes:
Patience really is a virtue.
Everyone has dark secrets.
Nice girls don’t have to be virgins.
Marijuana definitely does NOT make you funnier.
Humor writing has to be taken seriously.
Never, ever lose your sense of humor no matter what!
I lost Lisa to a Muslim DJ and within a year they were married and she had a baby. I only saw her once more (and she owes me money!).
Karen turned up a couple times more but she had fallen on hard times. 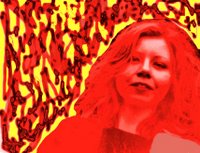 I last saw her about ten years ago and she didn’t even recognize me.
I found Alex on the Web last year with his comic strip PROM ON MARS. He's currently listed as reviews editor for PopImage but my email bounced back.. Greg went on to be the announcer on the game show I was on in the early eighties.

I never saw or heard of Pat, Mindy or any of the others again. In downtown Cincinnati, though, someone—probably one of us—had spray-painted the letters ORSWIC on the inside wall of a local parking garage where it stayed for the next fifteen years or so no doubt endlessly mystifying the yuppie businessmen who saw it every day. Pictured in this article are Pat, Mindy and Alex at top, Ed and part of the other Steve, Joe, the Flying Karamazov Brothers (he's saying "That's not a professional camera!" to me), Bob Shreve arriving for Comedy Day on the Square, Lisa and a flaming retouched shot of Karen (the only one I could find at the moment).
Posted by Booksteve at 9:20 AM