The Pyramid Illustrated History of the Movies 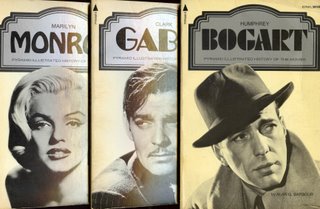 The mid 1970’s were a glorious time for budding film buffs with new film star biographies coming out weekly and classic movies on television on a regular basis. One of the most incredible and educational discoveries of my own formative years was the Pyramid Illustrated History of the Movies. This was a series edited by Ted Sennett and published, naturally, by Pyramid Books. Eventually it numbered at least 35 titles, perhaps a dozen or so more that I never picked up. The experts writing this series included many of the cream of the crop of seventies film historians: Rene Jordan, Jeanine Basinger, Alan G. Barbour, Jerry Vermilye, Robert F. Moss and more. Although a couple of the books covered genres, most of the titles were on individual actors and actresses. 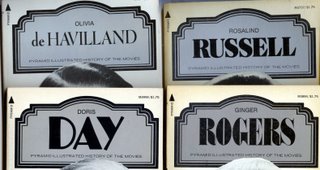 The A List stars like Gable, Bogart, Flynn, Monroe and Fonda were here, of course, but the series also presented

Sennett also edited two Pyramid editions of THE MOVIE BUFF’S BOOK which, although in a larger trade format, continued the layout of the series and offered a considerable amount of rare stills and trivia on classic films and their stars. Written by many of the same learned authors, a young Leonard Maltin also graced the pages of these larger books with his expertise.
In 1977, Harvest/HBJ (actually still Pyramid Books but with a name change) took over the series producing a few new additions (including

Orson Welles) and reprinting some of the earlier ones but sales dwindled and they were out of print by the beginning of the 1980’s.
These things go for a song when you find them in a used bookstore (I picked up a half dozen I had missed for $1.00 each about two years ago) and are fairly prevalent on Ebay so if you love movies or the great movie stars, I strongly suggest you start collecting the Pyramid Illustrated History of the Movies. Just as the movies themselves are still around, so are these marvelous, entertaining and informative books. You just need to look for them.
Posted by Booksteve at 1:24 PM